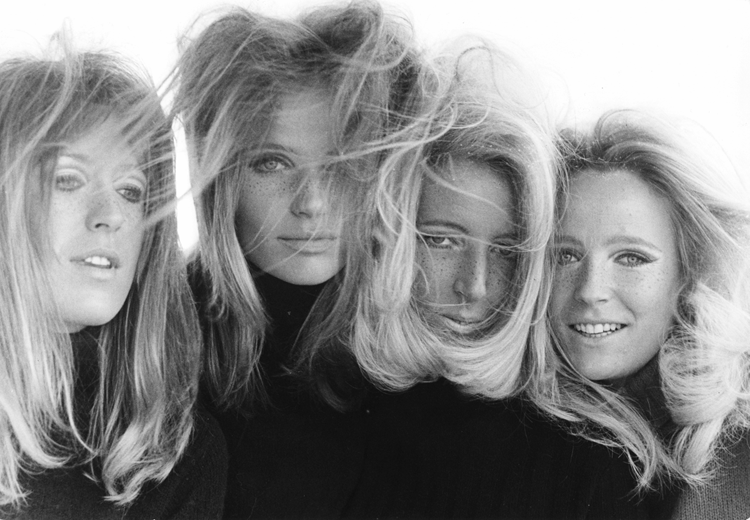 1968. Veruschka (second from left) and her sisters – Gabriela, Nona and Catharina. This photo is published in the December 1968/January 1969 issue of Vogue Paris. Another photo from the same shoot features in Vogue US with the caption:

The glow that energy lights

Sun-bent. Hale. Vitality stored like chlorophyll. Four sisters here, the daughters of Countess Gottliebe von Lehndorff of Germany. All blond, all tall, with enough length of leg among them for six mortals. One of them, the stalkiest, is Veruschka. Theirs is the beauty that only comes off with brains behind it, that is enlightened by ideas and talents ticking along under looks. These sisters are an intensely close family, even when oceans of geographic space divide them. Their hub is their mother’s house in deep country outside of Munich. Like their mother they spill interests. They paint. They sew. They design. They write. One is a jeweller. One is making a film. Two are married; one with two sons. Shortly before their father, Count Heinrich von Lehndorff, was executed in 1944 for his part in a plot against Hitler’s life, he wrote to his wife and children: “The verse chosen for me at my confirmation, ‘Watch ye, stand ye fast in the faith, quit ye like men,’ shall be my guide to the last.” A heritage for four daughters. Possibly what powers their beauty is an energy of faith.