After a false start, Ella Raines’ career took off like a rocket. Over the course of eight years, from 1943 to 1950, she starred in 22 films and appeared twice on the cover of Life magazine.

Ella combined looks, talent and guts. Here’s an insight into her character from an interview in 1946.

She’s best known for her role as Carol “Kansas” Richman in Phantom Lady (1944) which, as she herself pointed out, was really four roles in one film: the prim, efficient secretary; the woman in love; the pretend femme fatale in a provocatively tight black dress, fishnet stockings and heavy makeup; and the intelligent and resourceful amateur sleuth chasing down suspects.

Phantom Lady was the first of three films noirs she made with legendary director Robert Siodmak. Eddie Muller, founder and president of the Film Noir Foundation, spoke for many enthusiasts in admiring Ella Raines’ impressive talent within the genre.

My biggest regret is that Ella Raines was not better utilized in the noir era. She was so smart and sexy— a real Hawks dame in the Bacall mode— but she ended up playing mostly opposite leading men with little sex appeal: George Sanders, Charles Laughton, Brian Donlevy, Edmond O’Brien, George Raft. If she’d been trading one-liners with Dennis O’Keefe and Dan Duryea, she’d have a much more memorable screen persona.

But Ella was a versatile actress with a talent for comedy as well as drama.

She was ‘discovered’ by Howard Hawks, who also ‘discovered’ Lauren Bacall. Here’s how it happened according to an article in the December 1945 issue of Screenland. The year is 1942 and she’s 21 years old…

A friend of hers who’d learned of her illness at the same time he’d heard that Hollywood agent Charles K. Feldman was in town scouting for new talent, dispatched Mr. Feldman (properly impressed) up to the Plaza. Whereupon Mr. Feldman (still more impressed) met Miss Raines, borrowed two of her photographs and showed them to Charles Boyer and Howard Hawks who were then forming their million dollar B-H producing corporation back in Hollywood. The aforementioned gentlemen took one long look, the kind of look that comes out like a whistle, and sent a telegram. Would she like to sign a contract? She would. (Fanfare, bugles blowing.) So on February second, 1943, Ella arrived in Hollywood, February third she had a screen test. February fourth she started work on “Corvette K-225,” the picture Hawks was currently producing at Universal.

Corvette K-225 was held for release, so the public was unaware of Ella Raines, but news of her spread on the Hollywood grapevine. In the space of 12 months, MGM loaned her for Cry Havoc!. Paramount cast her to play the lead opposite Eddie Bracken in Hail the Conquering Hero. And Universal put her centre-stage in Phantom Lady.

Rather than a potted biography, here are a couple of incidents that illustrate Ella Raines’ not-so-straightforward journey to stardom, having decided at high school to become an actress.

Ella Raines – out of the frying pan

Well, not so much frying pan as oven…

The year before she went to Hollywood (1941), Ella’s acting career was almost over before it began. Another extract from that article in the December 1945 issue of Screenland…

She and Virginia Booker, an old friend who’d already achieved some success as a comedienne, took a bungalow at the beach, excitement running through them like quicksilver. A summer was a lifetime, there was no limit to the glories they could perform, today they had Fate in their hands — tomorrow the world! Until Fate decided that the fun had gone far enough. It was Labor Day and the girls were having some of the Little Theater gang up for dinner. Nothing elaborate, a simple throw-together meal. So simple that Virginia, “the cook of the family,” shooed Ella off to the beach.

Ella’d come home sand-gritty and dripping with sun tan oil, dying to get under a shower but also anxious to get he ham started. Impatiently, she lighted a match for the oven and ducked her lead down to make sure the flame had caught. A split second, and then torrents of pain. And through it all, nothing except the smell of flesh burning and the crackle of burnt hair. And her voice thin and hollow and insistent in the stillness. 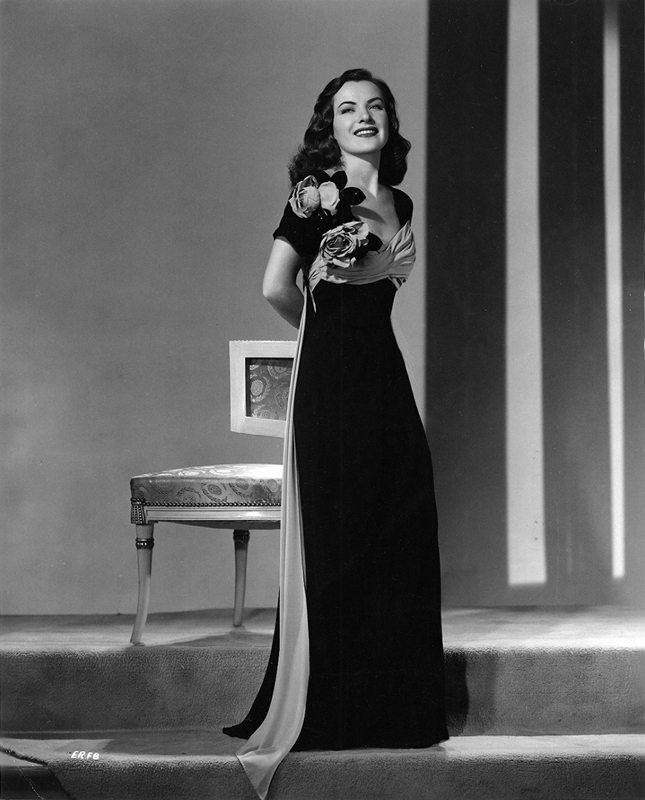 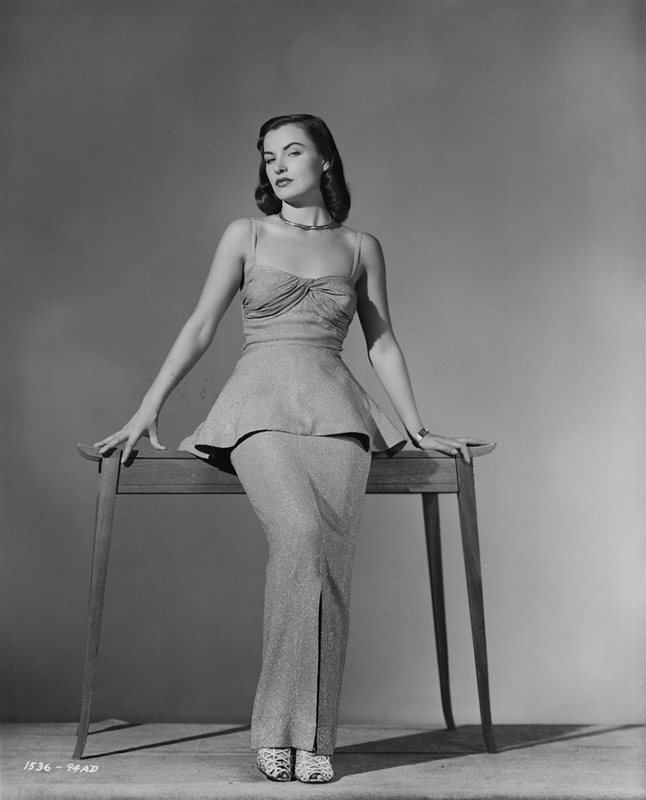 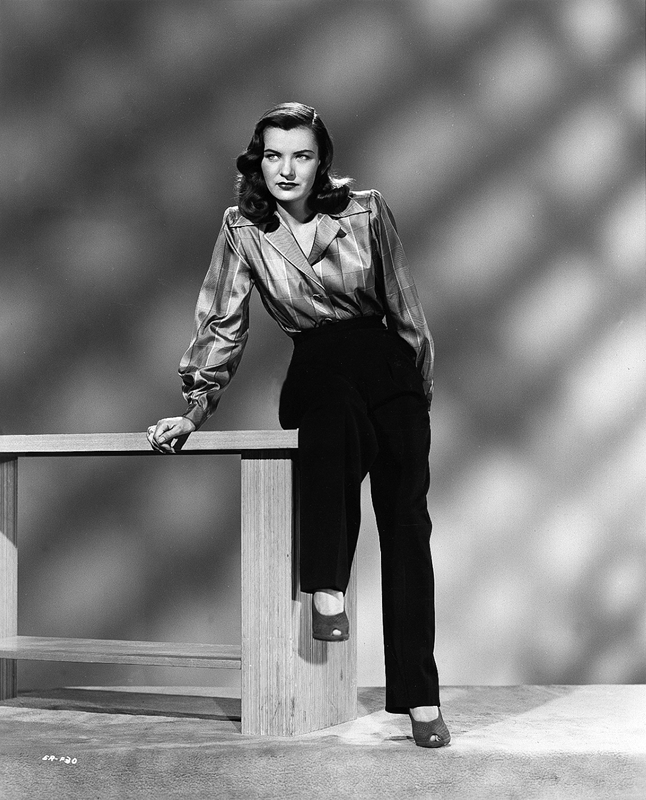 Ella Raines in shirt and slacks 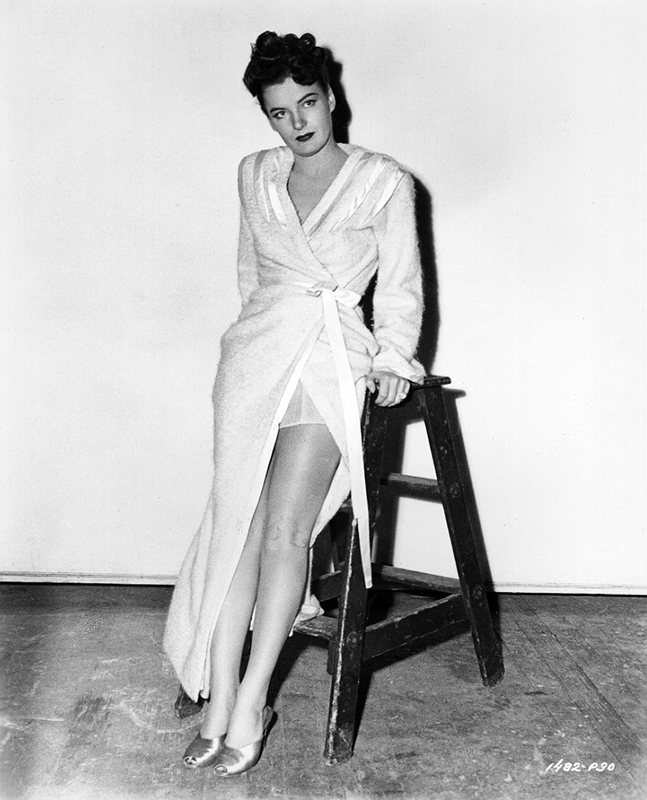 With her green eyes, high cheek-bones and svelte figure, she had previously been elected one of the six most beautiful girls on the campus at the University of Washington. It must have taken a good deal of pluck and determination to face her college mates in such a state – qualities she would need to make it in Hollywood.

It was a hard thing to do but I was lucky. I soon found out those who liked me for my appearance and those who cared for me for what I really was.

Ella Raines – into the fire

In her first year at Hollywood, Ella found herself caught in the crossfire between a super-talented and super-sensitive director, Preston Sturges, and his strong-willed executive producer, Buddy DeSylva. Here’s how Diane Jacobs describes what happened in The Life and Art of Preston Sturges…

To play Libby in Hail the Conquering Hero, Sturges picked a dark-haired ingénue, Ella Raines, who’d just made her film debut at Universal. Sturges discovered her at a casting call. … Buddy DeSylva from the start was wary about Ella Raines. So DeSylva reluctantly let Preston cast this new actress.

Then, the early rushes came in and Ella Raines looked stiff and fearful. She herself realized she was not doing her best. It was her first leading role, her first time off the Universal lot. She wasn’t long out of college and she “simply froze,” she recalls. “The first scenes for me came out awful.” 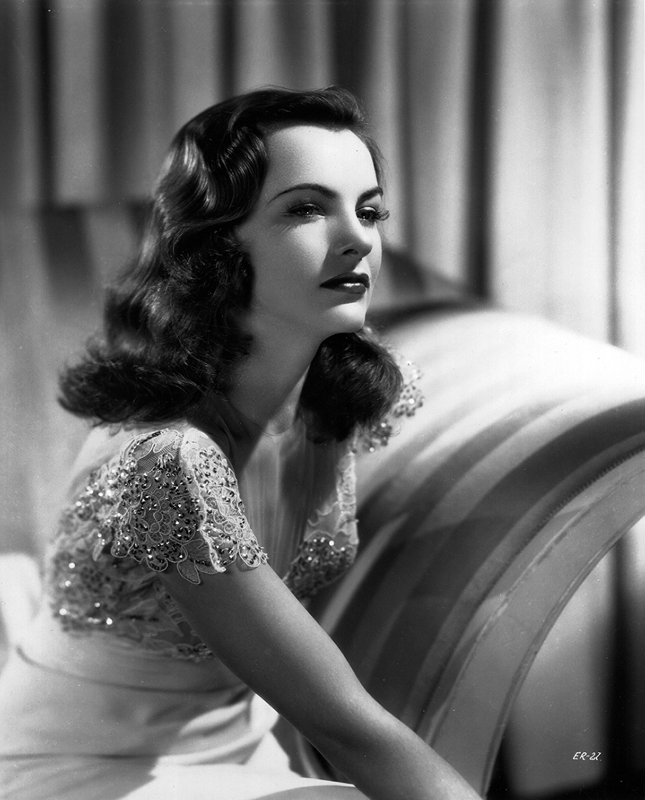 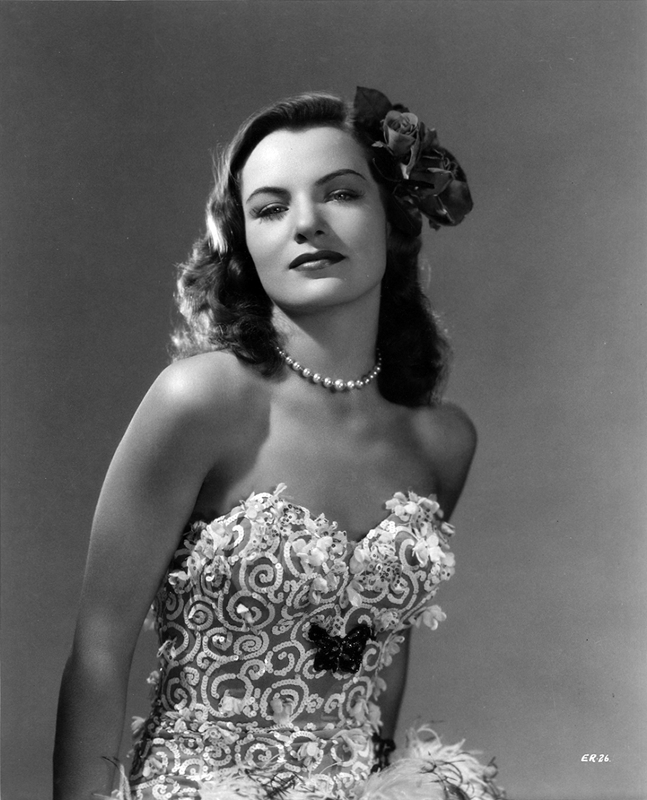 Ella Raines with roses in her hair 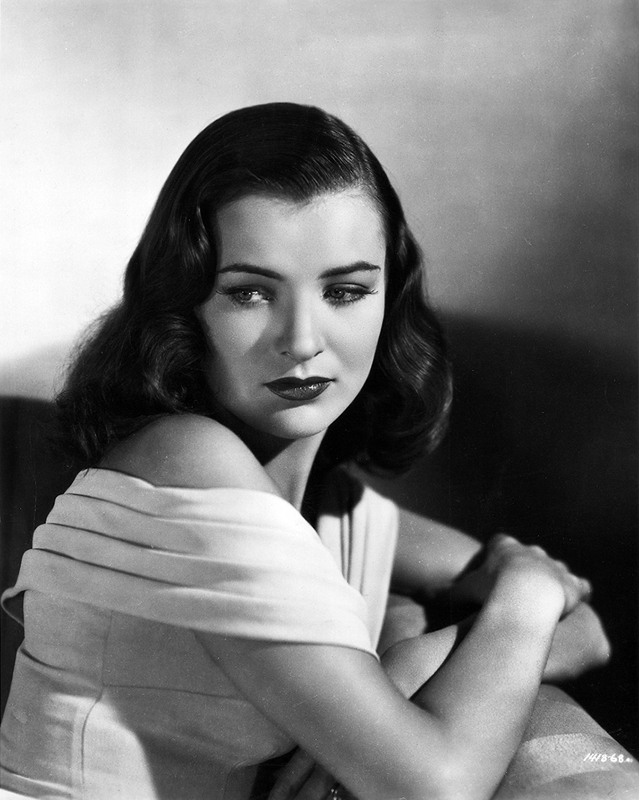 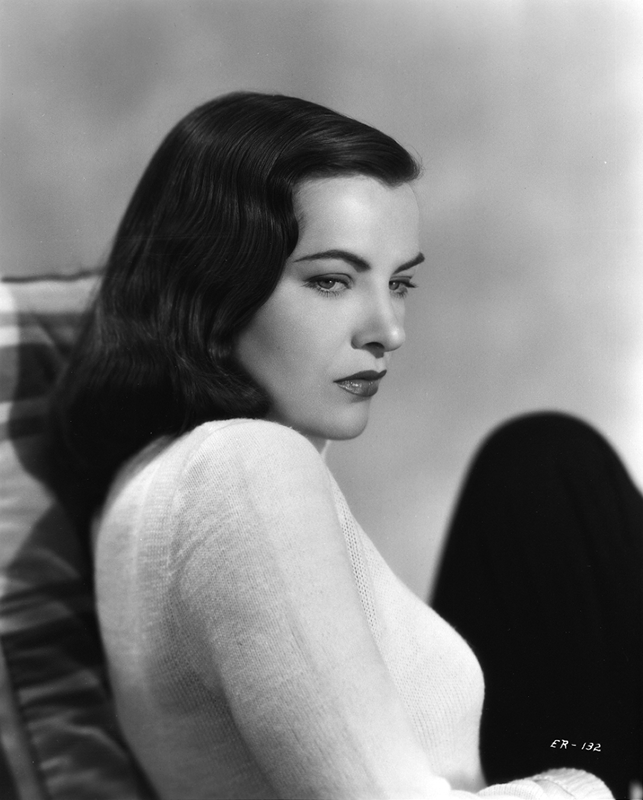 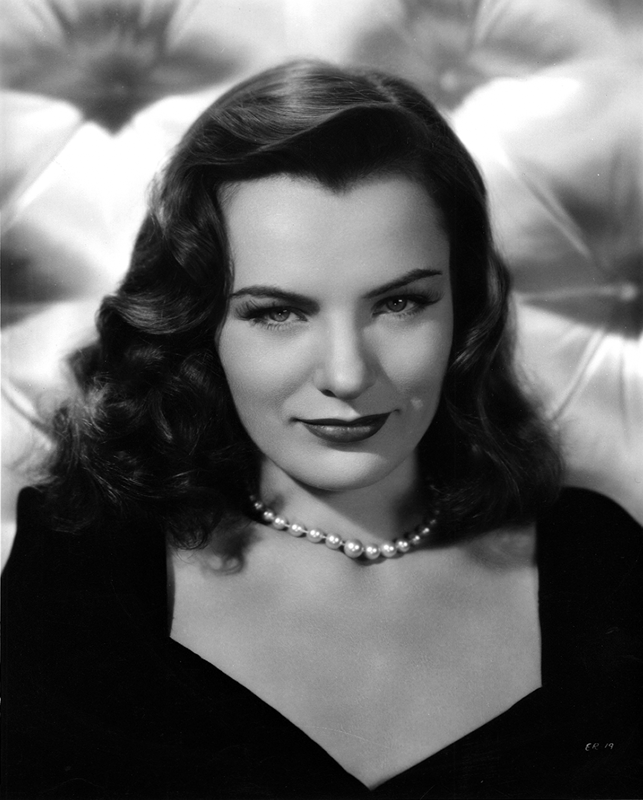 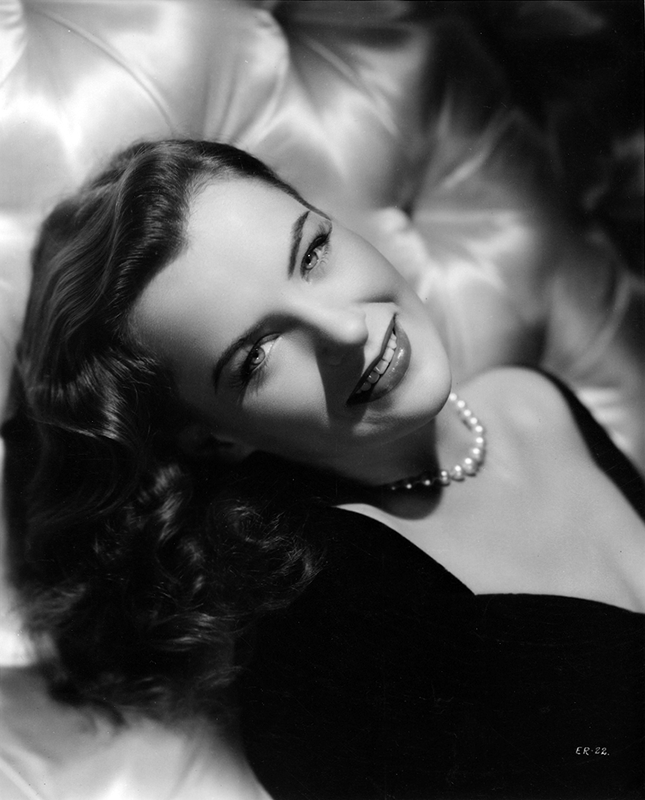 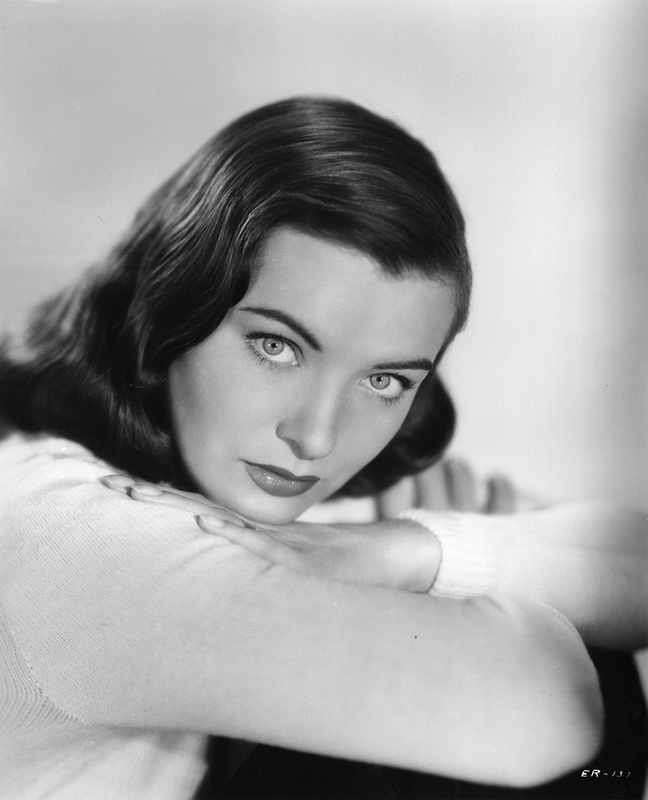 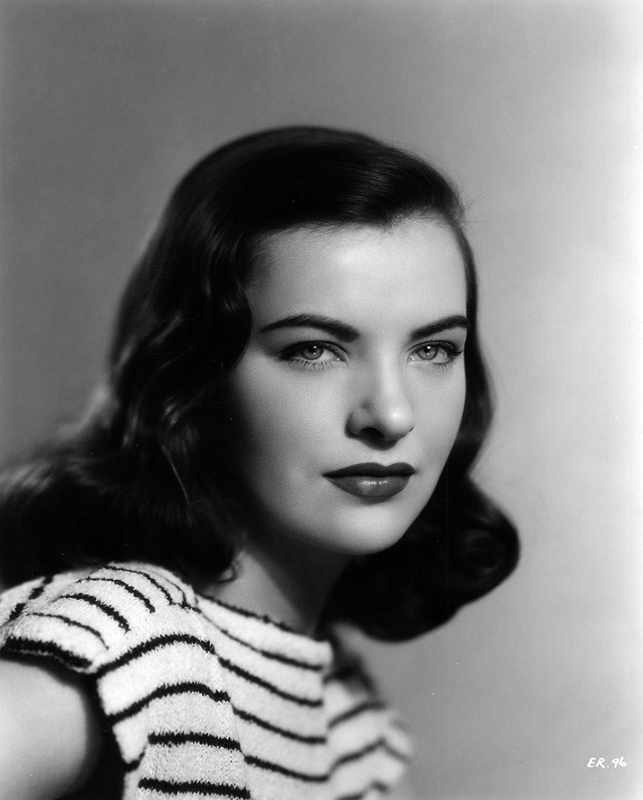 Ella Raines in a striped top

This time, it was not Buddy DeSylva, but Henry Ginsburg, an executive known as Paramount’s “Hatchet Man,” who confronted Sturges. By the fourth day of shooting, Ginsberg was not only insisting that Ella Raines leave the cast, he had himself appointed a Paramount contract player to replace her. Sturges was furious. Just before lunch, he came up to Ella, explained Ginsberg’s position, and promised that he would refuse under any conditions to capitulate. “Don’t worry,” he said, when Ella burst into tears. “I will not continue with this picture without you.” He then went off to Ginsburg’s office to talk. Whatever these two men said that day was so traumatic that it in effect ended Preston’s career at Paramount. More than Ella was at stake, a friend of Preston’s recalls. Firing his star was a personal affront to Preston, one that he would not tolerate, He won his point; Ella Raines stayed on.

And I bet that wasn’t the first or the last time a director and producer clashed like that.

But Ella came through, the reviews were favourable and she went on to make another 18 films before decamping to England in 1950 to join her husband, Robin Olds.

There are brief biographies of Ella Raines at wikipedia and IMDb and an interview with her daughter, Christina Olds, by Letícia Magalhães. There’s also an obituary in The New York Times. The most helpful account of her life I’ve come across, though, is in Femme Noir – Bad Girls of Film by Karen Burroughs Hansberry.

Ella Raines was the subject of four articles in Screenland and you can find them at the Media History Digital Library. I’ve transcribed the one I found most engaging and illustrated it with photos from my archive. Its called Girl With A Glint. 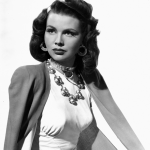 Dusty Anderson – the life of a starlet 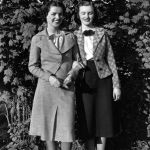 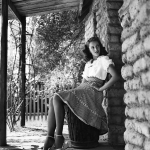