Sabrina was Britain’s number one pinup of the 1950s. She was Britain’s answer to Marilyn Monroe. Her career really took off after her first TV appearance next to the nation’s favourite comedian, Arthur Askey.

All she did was stand there, an archetypal dumb blonde, smiling in a figure-hugging sequinned dress, while Arthur did his stuff for the BBC’s Before Your Very Eyes.  Never before had a girl been allowed to show cleavage on British television. The effect was electric. As reported in an article in the 29 June 1955 issue of People:

When Britain’s now-famous television blonde, Sabrina, made her first appearance earlier this year, she did not speak, sing, dance, do conjuring tricks or even pull faces. She merely slid off the sofa on which she had been lying, clad in a skin-tight black dress, undulated toward the TV cameras and slowly turned sideways-on. About 4-million screens throughout the country were blotted out by a 39in bosom – and Sabrina had arrived.

The BBC was flooded with phone calls and letters in the next few days, and officials quickly “began measuring her for even more revealing gowns.” But before the show, the BBC had choreographed a warm-up act to ensure that Sabrina would not go un-noticed, as reported in the following article, which appeared in the 15 March 1955 issue of Picturegoer. By the way, Lime Grove Studios in West London (referred to in the article) were used by the BBC for television broadcasts from 1949 to 1991.

I would never have believed it of Lime Grove. Those normally dignified B.B.C. people became as publicity-crazy and gimmick-berserk over the new Arthur Askey showgirl Sabrina, as any Hollywood studio.

In seven days, they made Sabrina a legend … and they were the seven days before she’d even appeared on the screen.

Bill Ward, Askey’s TV producer, picked Sabrina after auditioning a dozen girls. He then had seven days in which to “sell” her, so he called in the publicity boys, saying: “Britain must know this girl before she even appears. Now get cracking.”

The story of Sabrina’s coming was announced trumpet-wise by Lime Grove as an exclusive for the Sunday newspapers. Clever – those papers always go for a glamour-girl picture.

By the fourth day, Sabrina had clocked up considerable space in nine of the national newspapers and uncounted spaces in provincial ones.

The only snag thus far was that Fleet Street had ignored Bill Ward’s appeal that nobody should reveal Sabrina’s real name. The newsmen had told the world that this gal was Miss Norma Ann Sykes.

Sabrina, meanwhile, instead of being bewildered and shy, began putting both feet well forward to make the best of the remaining days in Build Up Week.

At a Lime Grove press reception for her, a tactful publicity officer whispered: “It might be a good thing to tell the newsboys your vital statistics.”

For the first time, Sabrina looked puzzled. The publicity officer explained more frankly what vital statistics are. “Oh,” said Sabrina, and rattled them off, one by one, delightedly.

Sabrina then went on a round of Fleet Street offices. She had a long, cosy chat in the padded interviewing room of one national paper.

And she sent to the editor of a London evening paper a note that asked: “Why all the fuss over Marilyn Monroe? I’m here now. Want to see me?”

The editor received her, passed her quickly to his gossip department to get a quick note in the next edition. “I can’t act, I can’t sing. I can’t dance …” began Sabrina.

Gossip-writer pressed hard to find some less negative angle. “I broke my leg. They set it wrong, and I had to have it re-broken to put right,” confided Sabrina.

Gossip-writer scribbled furiously, until she said: “But I’ve promised that bit of my story to a morning paper.” Still, both papers did her proud.

On the fifth day of Build Up Week, Sabrina was operating around Lime Grove. Armed with a thick camera script containing more pages than any Askey show would ever need, she told onlookers:

“I’m only just beginning to go to drama classes. Heaven knows how I’ll remember my lines. But never mind” – patting the volume of script – “they’re all here.”

In the TV canteen, Lime Grove secretaries were transfixed, knives and forks poised between plates and pretty mouths, as Sabrina tucked into five courses of starch-supplying lunch.

The night before her TV debut, Sabrina turned up at the premiere of A Prize Of Gold. A hardened film publicity man reported: “I’ve never seen anyone so able to walk into the centre of every cameraman’s picture.”

But Sabrina has only just started drama lessons … A quick learner? Maybe. Certainly the quickest build-up British TV has produced – with the aid of Norma Ann Sykes.

Or has Norma taken Sabrina for a ride? 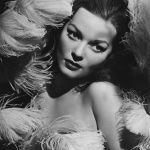 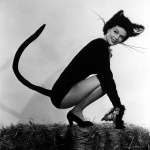 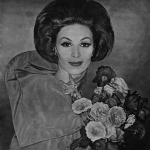