Princess Ira von Fürstenberg has been gossip-column fodder ever since becoming a child bride in 1955. By the mid-’60s she was a glamorous fashion model and movie star too.

Her celebrity credentials are impeccable. Her father, Prince Tassilo zu Fürstenberg, was a German aristocrat. Her mother, Clara Agnelli, was the elder sister of Fiat’s chairman, Gianni Agnelli. A perfect blend of nobility and wealth. And lest anyone fail to notice her elevated social status, her parents christened their daughter Virginia Carolina Theresa Pancrazia Galdina Prinzessin zu Fürstenberg.

But it is THAT WEDDING that shoots our Ira to notoriety. She is just 15 years old and, according to IMDb, she will later claim her parents threatened to disown her and send her to a convent if she refused her proposed husband.

At 31, he is twice her age. He is also Prince Alfonso of Hohenlohe-Langenburg, not just a compelling dynastic match but also a businessman with a flair for romance and marketing.

Prince Alfonso von Hohenlohe, a scion of one of Bavaria’s grandest families and a man of silken charm, was touring the Spanish coast in his charcoal-burning Rolls-Royce in 1947 when, they say, he stopped for a picnic at Marbella, a small fishing village. Enchanted by the view and acting on his father’s mandate to find property to help revitalize the family’s depleted fortunes, he purchased a ramshackle vineyard for 150,000 pesetas (about $14,000 at the time) and proceeded to sell plots to his wealthy and influential friends, who had family names like Rothschild and Thyssen.

The resort quickly developed, and in 1954 Hohenlohe converted a farmhouse into a luxury hotel, dubbing it the Marbella Club. There, the Duke and Duchess of Windsor cavorted with Hollywood stars and European aristocrats. The crowd at the Marbella Club was so grand that even the sometime piano player, a Spanish nobleman named Don Jaime de Moray Aragón, whose sister was queen of the Belgians, was said to be directly descended from 56 kings.…

You can read more in Christopher Mason’s History of the Jet-Set and their Favorite Travel Spots for Town & Country. 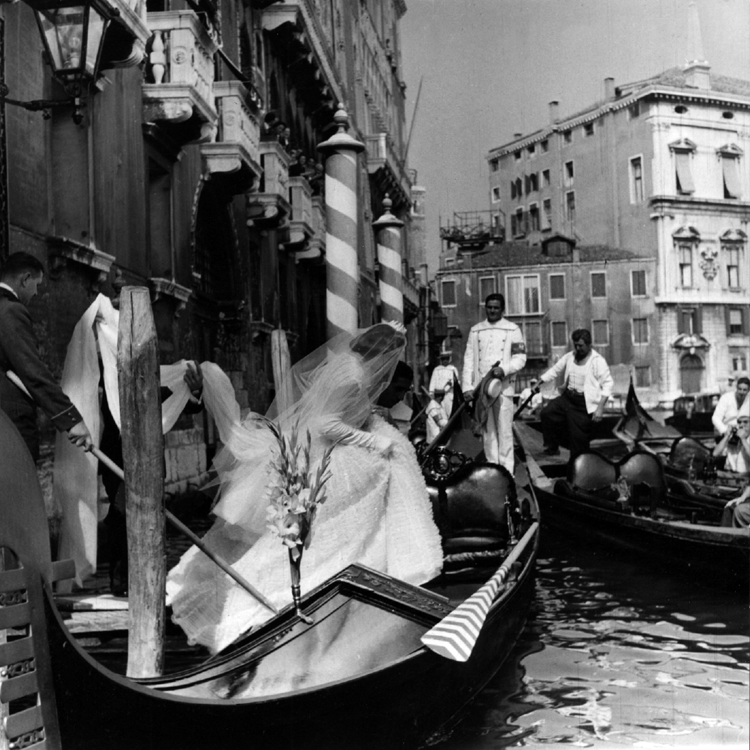 Off to get married

Venice, 17 September 1955. Princess Ira von Fürstenberg steps into the gondola that will take her to her wedding with Prince Alfonso of Hohenlohe-Langenburg. 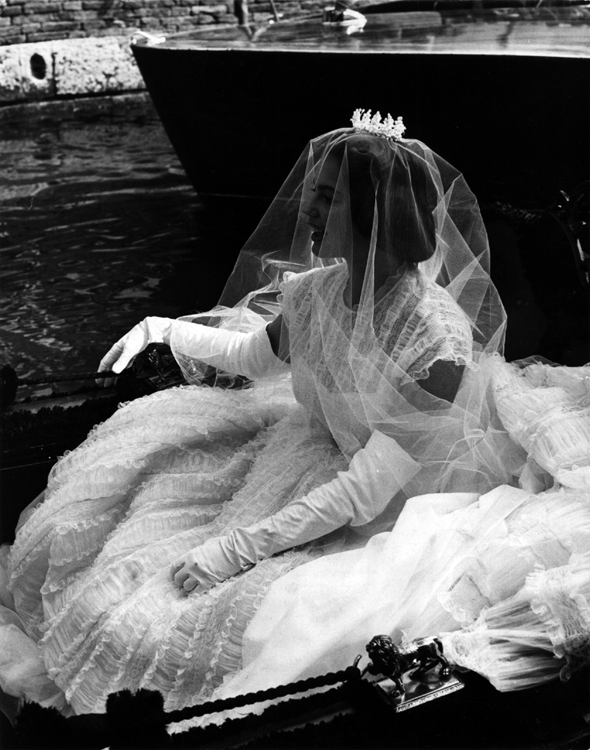 Venice, 17 September 1955. Princess Ira von Fürstenberg on the way to her wedding with Prince Alfonso of Hohenlohe-Langenburg.

The wedding takes place in Venice and the celebrations are appropriately lavish, lasting for three days. A shot of the Princess arriving by barge appears on the front cover of the October 17, 1955 issue of LIFE magazine. And there’s a video clip of the event on British Pathé’s website. The couple have two sons before their divorce in 1960.

Ira von Fürstenberg meets her future second husband, Francisco “Baby” Pignatari, at a party. He is a Brazilian industrialist. The couple marry in 1961 in Reno, Nevada, only to divorce three years later. Ira continues to be romantically linked in the gossip columns with various beaux, the most famous being Prince Rainier, following Princess Grace’s death in 1982.

In the mid ’60s, opportunity comes knocking on Ira von Fürstenberg’s door, as she recalls in an interview for Vanity Fair:

I was alone and without my children. I had divorced twice and suddenly, Dino de Laurentiis [an Italian film producer who, along with Sophia Loren’s husband, Carlo Ponti, helped put Italian cinema on the international stage after the Second Word War] asked me to do movies. They were the happiest years of my life. The best people I’ve tried. Passionate, different, loving. Each shoot was a new family and that’s what counts for me. 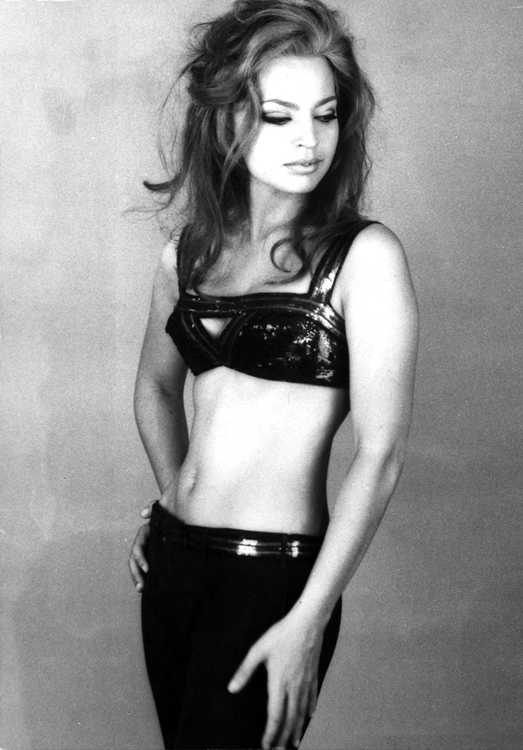 Ira von Fürstenberg in the world’s most glamorous crop top

1966. Princess Ira von Fürstenberg looks jaw-droppingly svelte in this minimalistic outfit she gets to wear as Arabella in Matchless. With a look like that she must have had her time cut out warding off the advances of any number of Prince Charmings. Photo by Glauco Cortini. 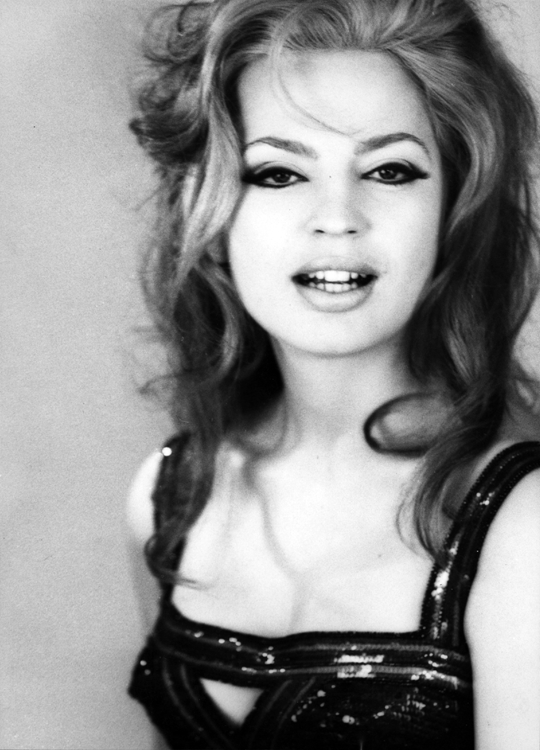 1966. A closer look at that glamorous crop top. Princess Ira von Fürstenberg, with smouldering eyes and pouty lips, gives the camera her most seductive, come-and-get-me expression. She's in the character of the irresistible Arabella in Matchless Photo by Glauco Cortini. 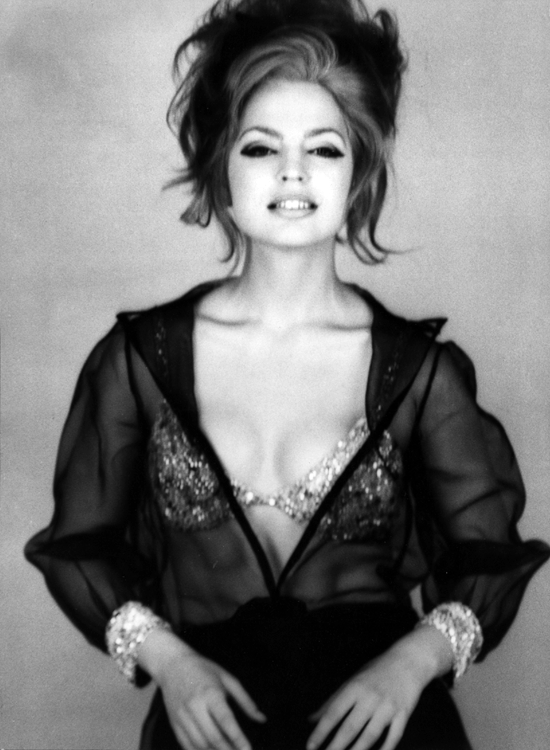 1966. Does this shot remind you of anything? For instance, Eva Herzigova's eye-popping,traffic-stopping 1994 campaign poster for Wonderbra? In fact the sheer shirt and sequinned bra are one of the costumes worn by Princess Ira von Fürstenberg as Arabella in Matchless. Photo by Glauco Cortini. 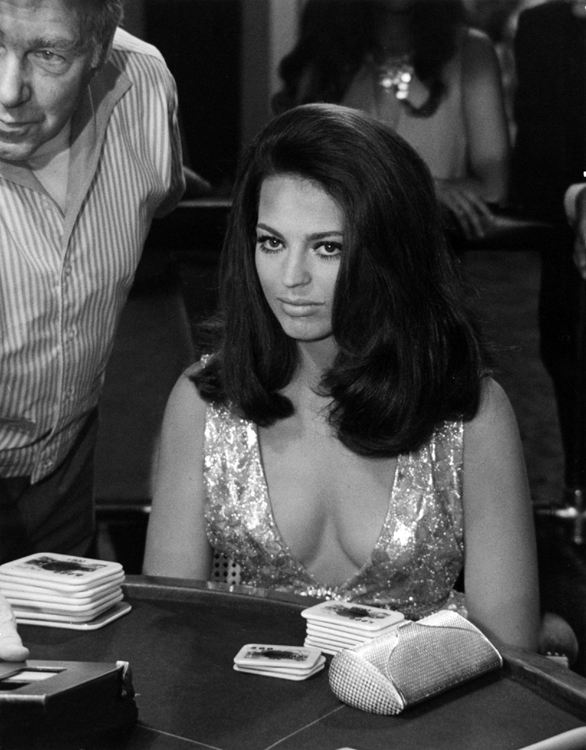 Ira von Fürstenberg at the casino

1966. Princess Ira von Fürstenberg as Evelyne Rossan in Hello, Goodbye. Casinos, with their jet-set associations, were a favourite venue for so many 1960s thrillers and spoofs, and bring to mind Richard Avedon's famous 1954 shot of Sunny Harnett modelling a Grès evening dress at the Casino, Le Touquet. Photo from the Pierluigi Picture Feature Service.

Her first appearances are in three movies released in 1967: Rasputin, Dead Run and Matchless. The last of those, a frothy piece of period silliness, is available to watch on YouTube. In a scathing review, the New York Times reports that:

Ira does, indeed, look gorgeous and goes on to make a further 26 appearances in European B-movies. But Ira’s movies meet with little success, as Andy Warhol notes in his diaries:

Went to Regine’s dinner for Ira Von Furstenberg (cab $2). Regine never showed up. Talked to Ira. And then her son came in and he was so good-looking. … Princess Ira has always wanted to be a movie star. Always. She’s been in lots of movies that never made it. I saw on TV the other night the Darryl Zanuck movie that he made for his girlfriend, Genevieve Gilles, and Ira was the second lead.

Regine is of course Régine Zylberberg, the night-club impresario credited with inventing the disco. 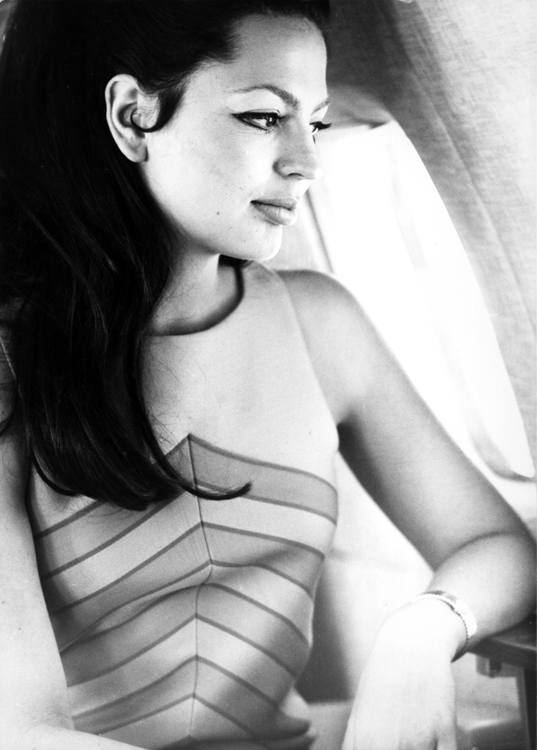 Around 1967. Princess Ira von Fürstenberg travelling in style in a striped, raw-silk dress. Could she be on a private jet headed for Monte Carlo or Marbella? Photo by Glauco Cortini. 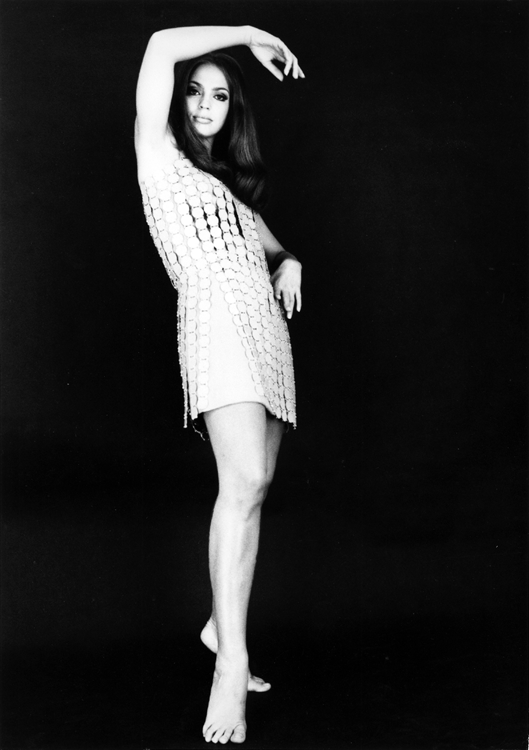 1967. The dress of metallic disks is classic, space-age Paco Rabanne and Princess Ira von Fürstenberg has the looks, the figure and the chutzpah to carry it off. Photo by Glauco Cortini. 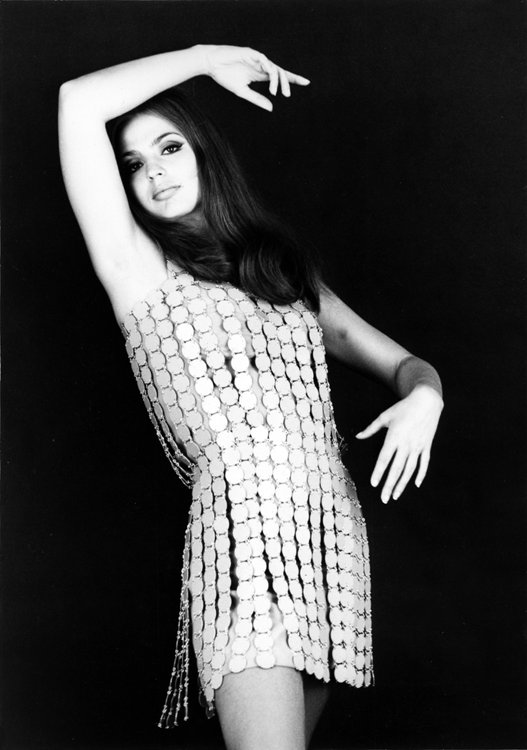 1967. A closer look at that Paco Rabanne classic modelled by the gorgeous Princess Ira von Fürstenberg. Photo by Glauco Cortini. 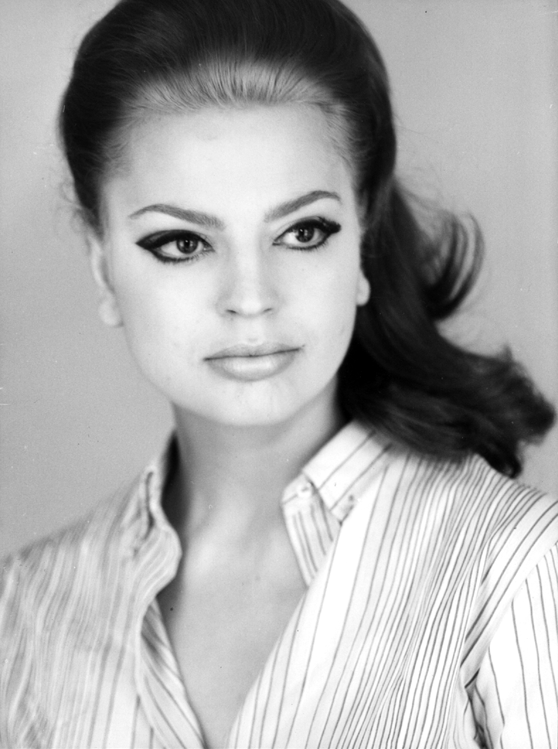 By the mid-’60s Ira von Fürstenberg is also featuring on the pages of fashion magazines including Vogue. Her suave and sophisticated looks clearly appeal to the fashion editors and photographers of the time including Gianni Penati, Henry Clarke and Irving Penn, as you can see in this Flickr album. You might also like to take a look at the scans of Alexis Waldeck’s shoot at Femme Fatale.

These days she works as an artist, creating sculptures and jewelry from found objects discovered on her travels. 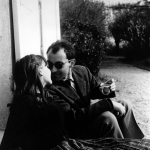 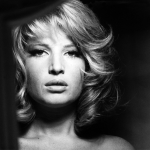 Monica Vitti – a sad childhood, a glittering career and a bitter old age 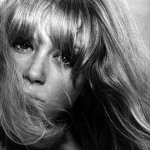