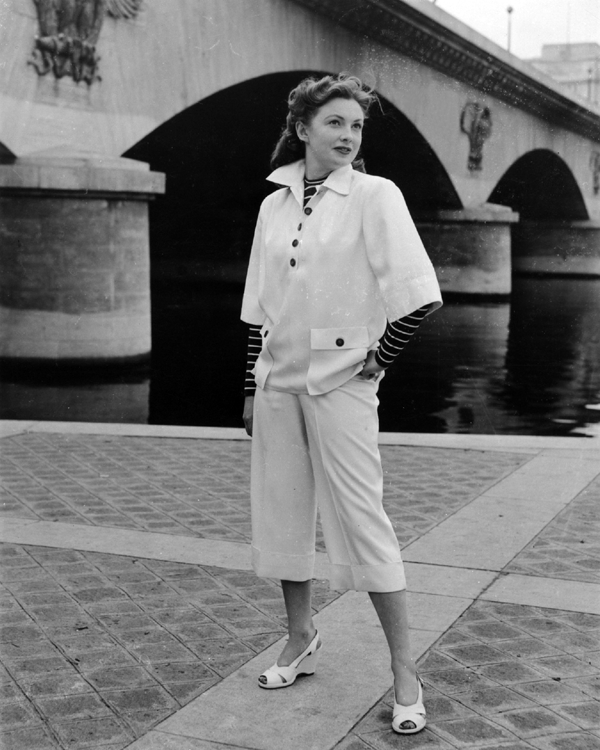 October 1947. Movie star Joan Leslie, petite and auburn-haired, poses by the Seine in this publicity shot for The Fashion Flight. She’s 22 years old and temporarily out of work while she battles her studio, Warner Bros, through the courts in an attempt to terminate her contract with them on the grounds that it was invalid because she had signed it as a minor.

Such a shame, because it had all started off so well. In 1941, age 15 she starred opposite Humphrey Bogart in High Sierra and The Wagons Roll at Night. In 1942, she danced opposite James Cagney in Yankee Doodle Dandy. And in 1943, she partnered Fred Astaire in The Sky’s the Limit and co-starred with Ida Lupino in The Hard Way. In 1946 Motion Picture Herald voted her the Most Promising Star of Tomorrow.

But her fresh looks and innocent demeanor led to her being cast all too often in boring forces-sweetheart and girl-next-door roles, which she wasn’t willing to put with. Unfortunately for her, the studios still wield massive power in Hollywood and her movie career will never recover. In 1957 she will make her last feature film – The Revolt of Mamie Stover with Jane Russell, by which time she will be married to William Caldwell, an eminent Los Angeles obstetrician. She will turn her attention to bringing up her two identical twin daughters and raising money for Catholic charities. She will also go on to appear in TV commercials and take cameo roles in series such as Murder, She Wrote, Charlie’s Angels and The Incredible Hulk.