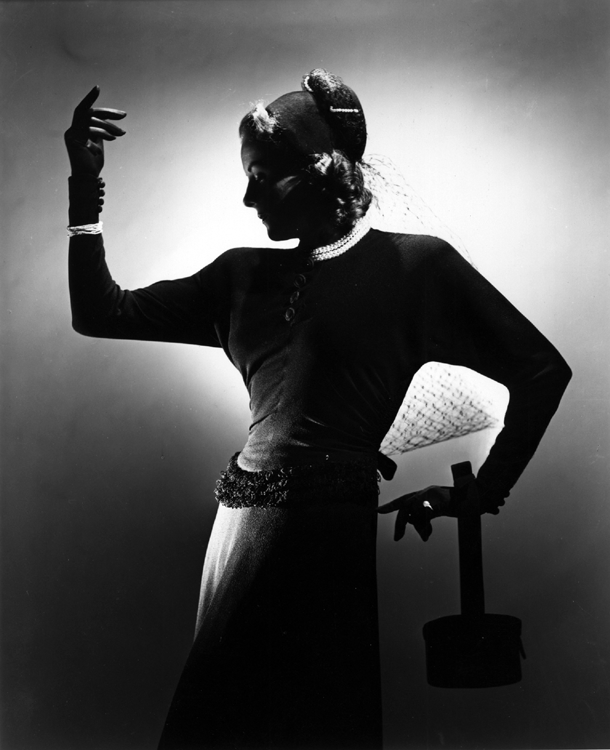 1945. Pandora Hollister poses for an advertisement for The Caldwell Company. Two years later, she becomes fashion coordinator for The Fashion Flight on behalf of the Manufacturers’ and Wholesalers’ Association of San Francisco. An article in the 18 February 1949 issue of The Times (San Mateo, California) provides more detail on her background and role in The Fashion Flight.

Miss Hollister, who made local headlines when elected to the presidency of the San Mateo High school student body 20 years ago, gained international reknown when she headed San Francisco’s “Fashion to Paris” show in 1947. The entire production of the “Fashions to Paris” show was carried out by Miss Hollister. She chose her 10 models from hundreds of girls applying for the positions and selected every piece of apparel and accessories modeled as well as planning the entire presentation. The show was hailed as one of the outstanding events in the international fashion field.

Miss Hollister began her fashion career early in life. While still a San Mateo student she took her older brother’s knickers, cut them into girl’s shorts and wore them to San Mateo City park. Women at the park gave her enough orders to more than pay for one of the first successful ventures.

Later she did free-lance modeling in the bay area, won two scholarships and attended Lucien Labaudt and the McDowell school. She was also employed as stylist for Edmund Loewe and later had her own business fashioning custom-made outfits for prominent Peninsula women. She now devotes all of her time to fashion counsel and publicity. Her topic for Saturday is “Fashions as a Career.” She will also discuss many new fabric trends and designs.