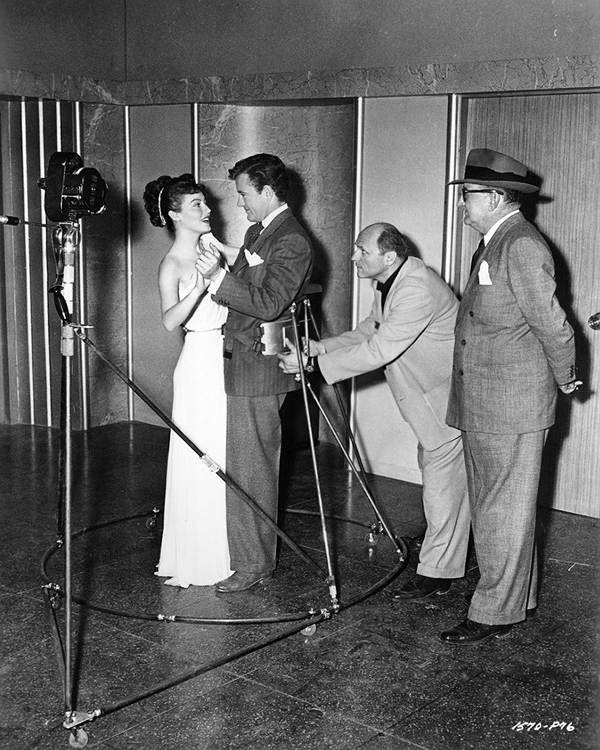 1948. A rare behind-the-scenes shot of Ava Gardner and Robert Walker preparing to film a scene for One Touch of Venus. A caption on the back of the photo reads:

CAMERA ANGLES – – Some Tricks of the Movie Trade

Did you ever sit watching a movie and suddenly find yourself wondering – how did the scene on the screen get photographed? Maybe it’s the action that intrigues you, maybe the circular sweep of the scene, making you wonder how the camera crew kept out of the picture. Since “The Birth of a Nation” brought new meaning to the motion in motion pictures, cameramen have been perfecting movie techniques. Herewith some photographic evidence of their photographic skill.

1. “One Touch of Venus,” soon to reach the screen with Ava Gardner and Robert Walker in starring roles, will mark the debut of the “dancing tripod.” Invented by Frank Planer, shown making an adjustment, it consists of a slender steel ring encircling a dancing couple. It is equipped with rollers enabling it to follow the dancers. Camera stand is part of the framework, so camera is close to dancers at all times. First one dancer, then the other is strapped to framework, making possible closeups of the other dancer throughout movement of dance. Director Wm. A. Seiter watches preparation for scene in “One Touch of Venus.”