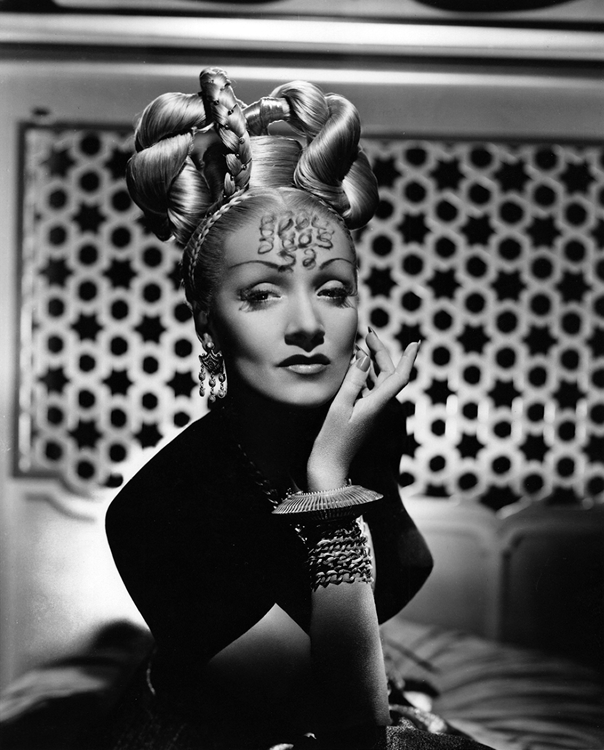 1944. Marlene Dietrich turns up the heat in this impossibly stylish publicity shot for Kismet. According to cinematographer Rudolph Maté:

She has a wonderful head. I mean both brains and shape. Furthermore, like no other actress, she understands lighting problems and angles, and takes all suggestions without a fight. She is cooperative despite the nonsense you read. She will pose for fifty different takes if need be. The reason she knows so much is that she acquired her photographic education from Josef Von Sternberg, her first director, who still has the best pictorial mind in the cinema business.

BAGDAD GLAMOUR…Marlene Dietrich, queen of Hollywood’s glamour girls, becomes Queen of the Bagdad dancers in “Kismet,” Metro-Goldwyn-Mayer Technicolor spectacle starring Ronald Colman as a beggar-magician who masquerades as a Prince. “Kismet,” which was directed by William Dieterle and produced by Everett Riskin, marks Marlene’s first appearance under the Metro-Goldwyn-Mayer banner and her first appearance with Colman. Irene designed Marlene’s exotic costumes and Sydney Guilaroff created her spectacular coiffures. Edward Arnold, James Craig, and Joy Ann Page head the supporting cast of the fantasy laid in Bagdad 1000 years ago.