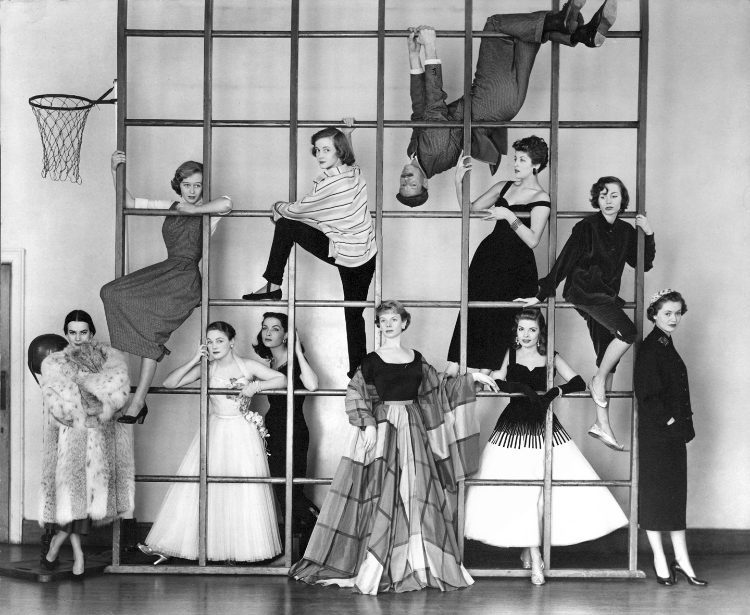 1953. This photo was published as a double-page spread in the January issue of Vogue UK (pages 36–7). The accompanying text reads:

THE YOUNG LOOK IN THE THEATRE

The English acting profession has recently blossomed into a springtime profusion of actresses, pretty, clever, so young that their clouds of professional glory are still tangled with those of childhood. Norman Parkinson photographed ten against a relic of their not-so-distant scholastic past, joining the group himself in a mood of nostalgia for youth.

Hazel Penwarden, dark and vivid, played Miranda, and Catherine in Henry V, at Stratford in 1951; was in the recent successful Winter Journey. Here she wears Albert Hart’s gorgeous lynx coat.

Yvonne Furneaux, sapphire-eyed, appeared in Twenty-Four Hours of a Woman’s Life, will be seen soon in The Beggar’s Opera and The Master of Ballantrae. She wears Rima’s black gold-trimmed jersey slacks, 13 gns.; matching top £7 5s. Fior.

Elizabeth Henson, prettily, delicately English, her style crisp and clean as new linen, was recently seen in Two Loves I Have at the Arts, and The Intruder on T.V. She wears Rima’s black corduroy drainpipe slacks, 7½ gns.; striped Sloppy Joe jersey, 10 gns. Fior.

Patricia McCarron, a romantic, du Maurieresque beauty, has been acting in Waters of the Moon since its far-distant opening, has a Hollywood contract. Her short black velveteen evening dress, with stole, by Dorville, £23 11s. Galeries Lafayette.