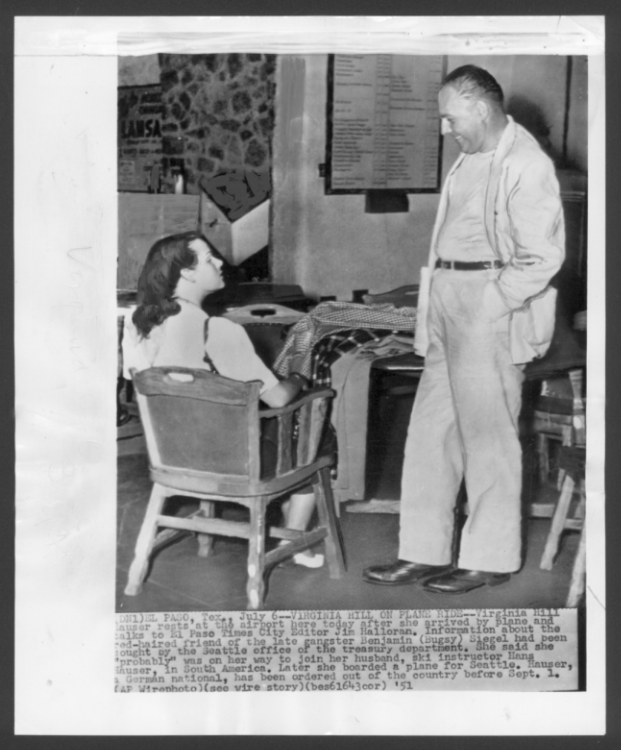 6 July 1951. Just over a fortnight before this photo was taken, Virginia Hill’s husband, Hans Hauser, had received a deportation order and left the US for Chile with their son. Virginia had gone into hiding. But following the Kefauver hearing three months earlier and all its attendant publicity, she was recognised at El Paso Airport. She was clearly uptight as, according to an article in the 7 July 1951 edition of the New York Times, she “slapped one newspaper reporter, and hit another with a shoe.”

The slug on the front of the photo reads:

(DN1) EL PASO, Tex.. July 6 – – VIRGINIA HILL ON PLANE RIDE – – Virginia Hill Hauser rests at the airport here today after she arrived by plane and talks to El Paso Times City Editor Jim Halloran. Information about the red-haired friend of the late gangster Benjamin (Bugsy) Siegel had been sought by the Seattle office of the treasury department. She said she “probably” was on her way to join her husband, ski instructor Hans Hauser, in South America. Later she boarded a plane for Seattle. Hauser, a German national, has been ordered out of the country before Sept. 1.

Attached to the back of the photo is a newspaper cutting:

RESTING AT AIRPORT –– Virginia Hill Hauser rests at the El Paso Airport Friday after arriving by plane and talks to Jim Halloran city editor of the El Paso Times. Ex-girl friend of late gangster Benjamin (Bugsy) Siegel, sought by Seattle office of Treasury Department, later in day was removed from plane at Denver by law officers for questioning. She was released a short time later and planned to continue on to Seattle.