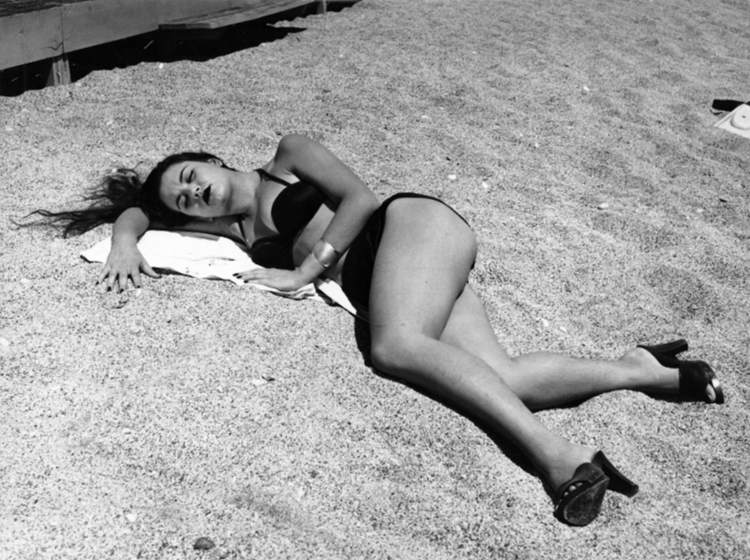 1954. Corinne Calvet becomes friends with Martine Carol at acting school. It is Martine who one day asks Corinne to go with her to a studio party. This leads directly to a contract with Paramount and her stint in Hollywood.

In La Spiaggia (The Beach), Martine Carol plays Annamaria, a good-natured prostitute who takes her young daughter from convent school with her on a summer holiday at a fancy beach resort.

At the end of the war, she broke into films and her career took off. Like Corinne, she has the potential to be a good actress but the roles she ends up with focus on her luscious good looks. By the late 1950s she’s eclipsed by the rising star of Brigitte Bardot.

Martine’s love life could hardly have got off to a worse start:

My first love was when I was 18. When he found out I’d been to dinner with another man he knocked me down and stamped on my face, breaking my nose.

Five years later at a Paris nightclub, she meets Pierre Loutrel, a vicious underworld figure. She leaves with him, possibly of her own free will, more likely under duress. Either way, she ends up resisting his advances and he beats her up and throws her out onto the street. After that her personal life is filled with turmoil, including a suicide attempt, morphine addiction as a result of a spinal injury suffered while filming, and four marriages.

She will die unexpectedly of a heart attack in a hotel room in Monte Carlo at the age of 46. You can find out more about her at The New European.

Photo by G B Poletto.