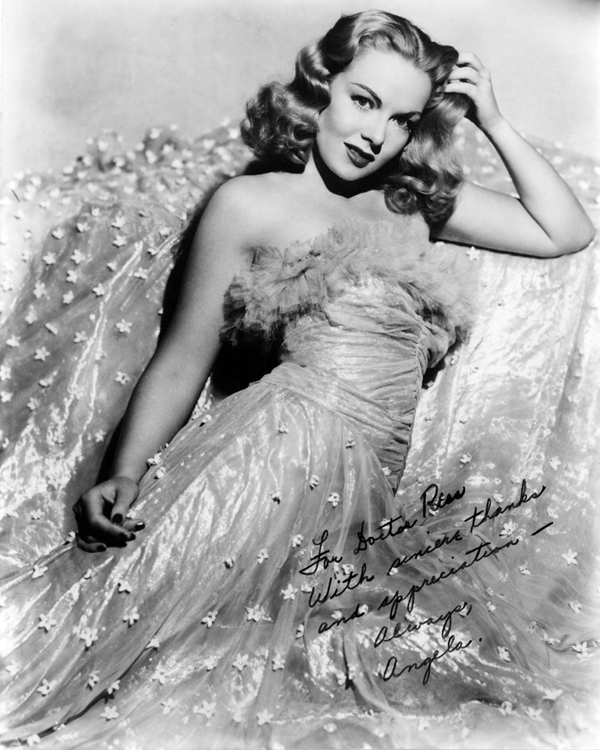 Mid-1940s. Inscribed “For Doctor Ress With sincere thanks and appreciation – Always, Angela.”

Angela Greene is born in 1921, grows up in Flushing, New York, becomes a Powers model, is crowned “Miss Rheingold” and works on Broadway. She appears on the cover of The Saturday Evening Post by Norman Rockwell in 1941, on the cover of the 14 July 1944 issue of Yank magazine and, clad in a bikini, on the nose of Skipper 2, a U.S. bomber.

Around this time she moves to Hollywood and dates actor William Lundigan and John F Kennedy (then a naval lieutenant), who is also seeing Phyllis Brooks. In December 1946 she marries Stuart Martin, a wealthy realtor with whom she will have four daughters.

Meanwhile, as an actress she’s typically cast in films as a standard heroine or as a brassy good-time girl. In February 1951 she will propose that the word “starlet” be abolished on the grounds that a girl with that label gets stuck with bit parts, pin-ups and wolves. In fact she will go so far as to turn down a major studio contract protesting, “I’m in my late 20s and have a child. We would both be embarrassed if they referred to me as a ‘starlet’ again.”

Her final appearance on screen will be in Future World (1976), her 100th credit on IMDb.