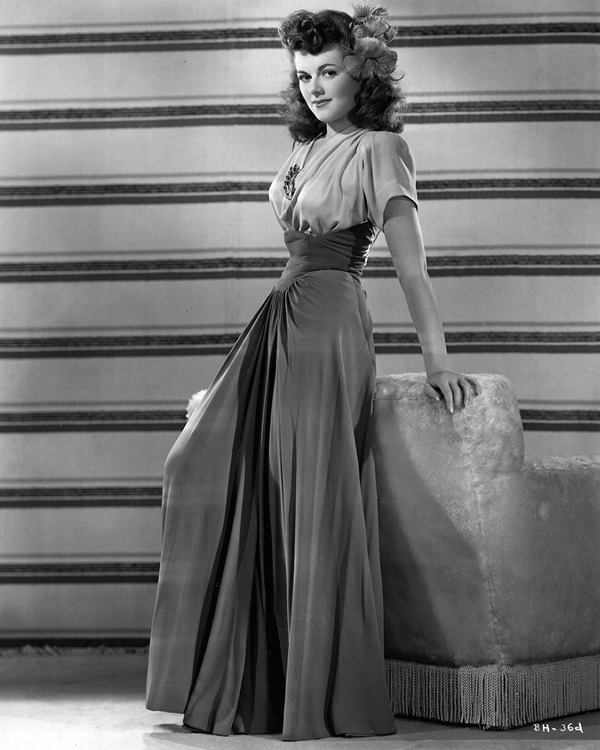 1943. Barbara Hale has been studying painting at the Chicago Academy of Fine Arts. To subsidize her studies, she’s done a bit of modeling for a comic strip and for some fashion magazines. Now, age 21, she’s caught the eye of Hollywood’s talent scouts and signed a contract with RKO.

Although she will never become an A-list actress, she will make over 100 movie and TV appearances. During her time on Perry Mason (1957), she will be known industry-wide for her screams; according to Raymond Burr, “She has the best shriek in Hollywood”. She will also be the star of dozens of magazine advertisements, hawking consumer goods from Lux soap flakes to Sunnybrook margarine and Chesterfield cigarettes.

This is one of her early publicity shots, with Barbara looking winsome with a trendy, piled-up, poodle-look coiffure. The caption on the back reads:

Barbara Hale, Sinaterella Girl! –– What better gift for a movie Cinderella than to get your first big role opposite Frank Sinatra in “Higher and Higher,” RKO Radio filmusical starring Michele Morgan and Jack Haley? That’s Barbara Hale’s luck, after six months in pictures and a few small parts. She kisses Frank, marries him in the picture. Miss Hale is a former Chicago Model.