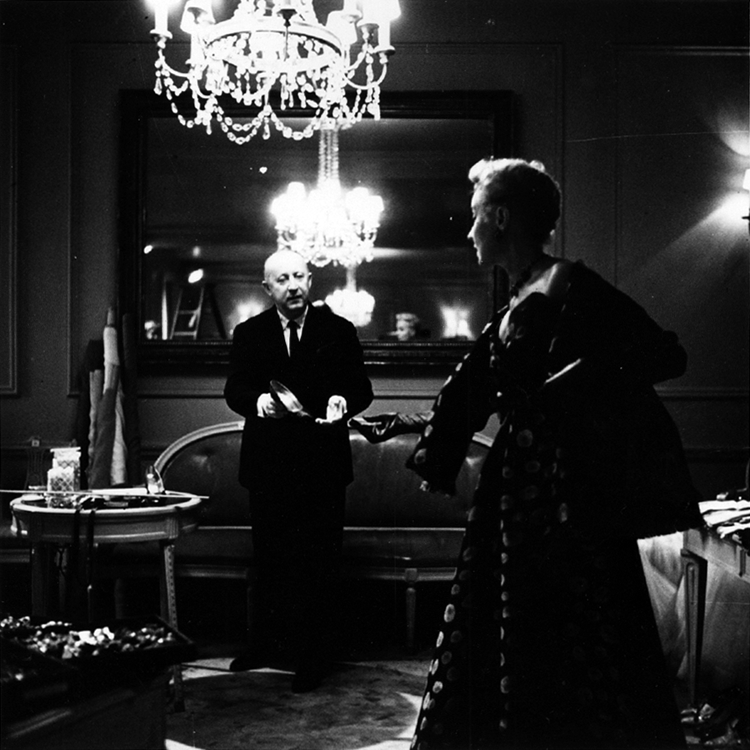 1957. During World War II, along with Pierre Balmain, Christian Dior works as a designer for Lucien Lelong. In December 1946, backed by textile-magnate Marcel Boussac, he opens his own fashion house.

Just two months later he presents his first collection, Corolle (a corolla is the whorl of petals of a flower; and later, referring to the silhouettes he has created, he is quoted as saying “I have designed flower women.” Corolle (better known as “the New Look”), with its revolutionary bustier-style bodices, wasp waists and padded hips, takes the fashion world by storm. But it also harks back to the corsets and crinolines, which dominated women’s fashions 100 years earlier.

Christian Dior is not just a great designer, he is an astute businessman too. In 1949 he becomes the first couturier to lend his name to a range of accessories to go with his clothes. It may be standard practice now, but in the late 1940s and early ’50s it provokes a storm of criticism for cheapening the image of the haute couture industry. It does not, however, deter celebrities such as Rita Hayworth, Ava Gardner and Margot Fonteyn from becoming customers, adding lustre to an already super-aspirational brand.

M. Dior’s greatest feat was the “New Look” in 1947, when he seized and held for France the style leadership of the world after it had threatened to pass to the United States in the post-war years. For his achievement the French Government awarded the Legion of Honor to him. Because his business sense matched his creative genius, M. Dior made fashions pay off. In 1953 his business totaled $17,000,000.