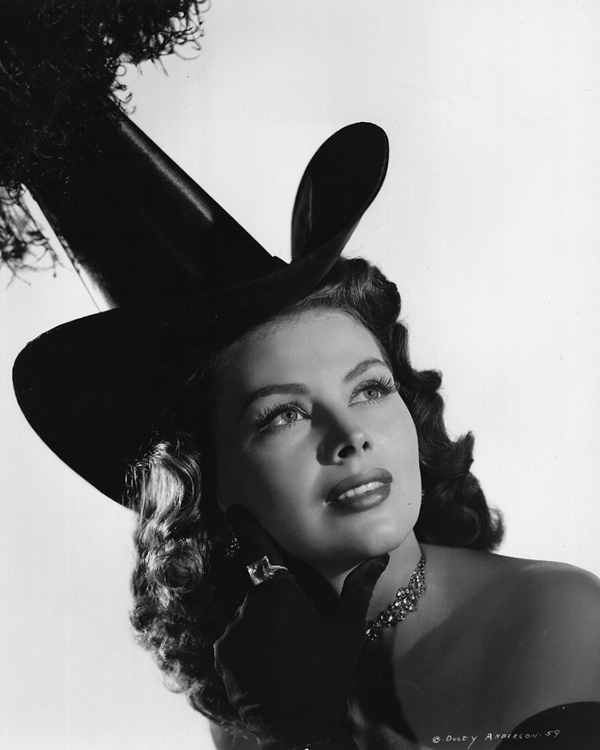 1945. You’d never guess it, but Dusty Anderson‘s life is in turmoil as she poses for this shot. She’s announced her divorce from Captain Charles Mathieu, and in February columnist Dorothy Kilgallen reports that:

Approximately 50 per cent of the Filmville lassies who have been wed men in uniform have either obtained divorces or have announced intention to do so.

Then in September, columnist Louella Parsons knows that Jean would like to marry Dusty immediately, but her divorce from Charles won’t be final until June.

Dusty has written the captain in China, sent papers, and asked him to sign a release so she can go to Las Vegas and get her freedom. But so far he hasn’t answered. Dusty believes maybe he hasn’t received them, but she is hoping that he will make it possible to her to get a Nevada divorce without delay.

Dusty and Jean will finally marry in July 1947. In the meanwhile, a caption on the back of the photo reads:

HALLOWE’EN GLAMOUR – Dusty Anderson, beautiful Columbia Pictures’ actress, will need more than that witch’s hat to frighten anyone on Hallowe’en, for she’s just too good-looking to be mistaken for a witch. Those masks might help if they weren’t such delicate creations of satin, with bead and sequin trim. Dusty recently finished a role in the Technicolor musical, “Tonight and Every Night,” which stars Rita Hayworth, Janet Blair and Lee Bowman.