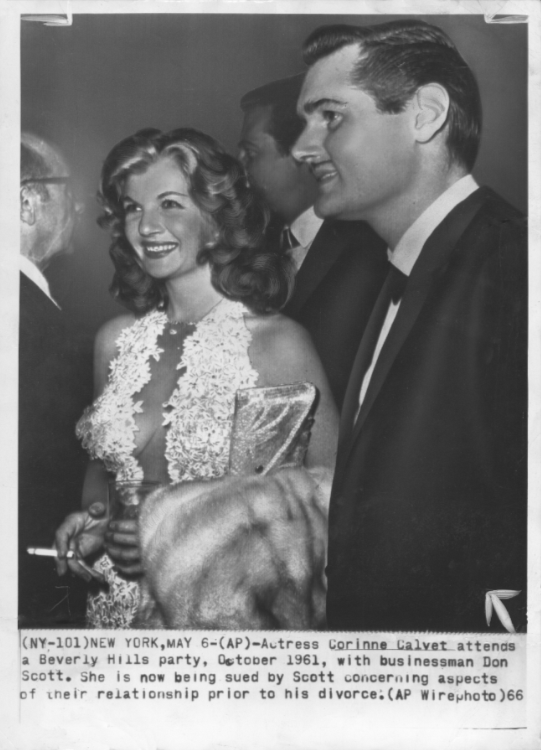 1961. That’s the date the photo was taken but this wirephoto version is distributed five years later to newspapers covering court proceedings. A date stamp on the back of the photo reveals that it was used on 7 May 1966. A newspaper cutting, also on the back, explains:

PARTY gaiety has turned to bitter courtroom wrangling for Corinne Calvet and her escort at this Hollywood party, Donald Scott. Scott is suing the French actress in Los Angeles Superior Court for £313,500. He claims he gave her this amount in gifts and living expenses so she would not reveal to his wife that they were having an affair. But 31-year-old Scott was divorced by his wife Rosalind in March. His gifts to the actress, who is 41, are said to include a £73,000 Beverly Hills house.

The trial runs for two weeks, during which Scott claims that Corinne used voodoo to control him. In the event, she is awarded $200,000.

As a grandson of the inventor of Scott’s Emulsion, a health tonic, Scott is heir to a fortune. Following the case, he retreats to a ranch in the Santa Monica mountains to live a secluded life with a small circle of friends and a handful of hobbies – mostly drinking, target shooting and reading the history of the Chumash Indians. In 1993 he will be shot dead by a visiting narcotics squad, who fail to find a shred of evidence that he’s involved with drugs.