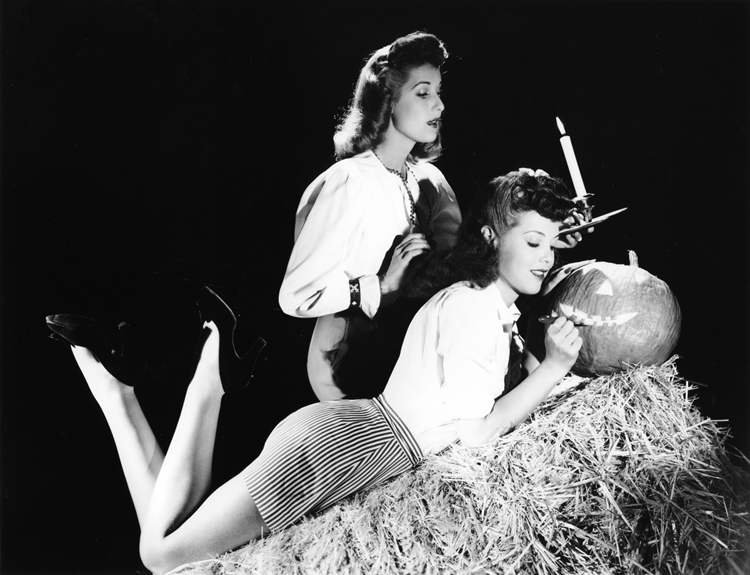 1943. Nan Wynn (holding the candle) has come to Hollywood on the back of her singing success on the vaudeville circuit and the wireless. Having earned the nickname “molten mama with the lava larynx”, she catches the eye of a Warner Bros movie scout while singing at Chicago’s Pump House. Now she’s at Columbia Pictures where she has recently dubbed Rita Hayworth’s singing voice in several films, including The Strawberry Blonde, My Gal Sal and You Were Never Lovelier.

Anita Louise (carving the pumpkin) peaked professionally in the 1930s, when she was named as a WAMPAS Baby Star, admired as a Hollywood society hostess and frequently described as one of cinema’s most fashionable and stylish women. For now she has been reduced to minor roles, but the advent of television will provide her with more opportunities.

And what of the photo here? A caption on the back reads:

SOME PUMPKINS – Nan Wynn won her screen opportunity because of her fine voice that has been heard in many night clubs and on the radio. Here she demonstrates her ability to carve a pumpkin in the best Halloween tradition. Anita Louise is the graceful helper who insists that the only way you can carve a pumpkin is by candle-light. Nan’s current screen assignment is in “Is Everybody Happy”, while Anita has just completed Columbia’s murder mystery, “Dangerous Blondes.”