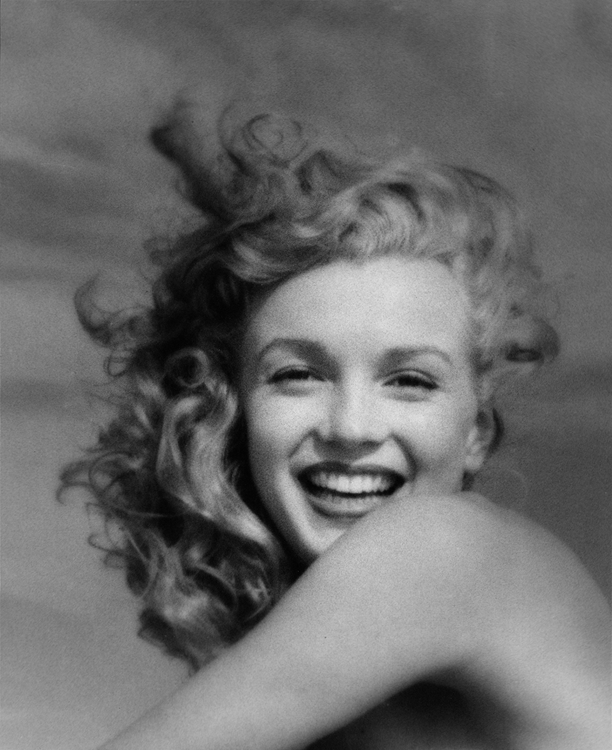 Tobay Beach, Oyster Bay, 1949. In this photo, taken four years on from the 1945 series, Norma Jeane is turning into Marilyn Monroe. Perhaps the most obvious difference is her hair, but there’s also an uninhibited confidence about her. And she’s just having the most wonderful time – her expression is joyful, her smile radiant. According to André, the shoot was a lucky break.

It was a really hot, humid summer day and Jones Beach was already crowded when we got there. I always hated taking pictures of models when there were people around, but to work among a crowd, that was impossible for me! I felt dismayed and we drove further to a place called Tobey Beach, which was also full of people. I was pondering what to do when luck came to my help. The wind began to blow, clouds were billowing, lightning struck, and the crowd, fearing the coming of an immense storm, hastily packed up and left the beach. Honestly, it was as if God had swept the beach clean just for Marilyn and me. Hardly anybody remained, yet it hardly rained at all, then the storm calmed down and disappeared completely and by mid-afternoon the entire beach was nearly deserted. It was like a miracle! Nobody came back. I could take pictures in peace for a few hours in the late afternoon sunlight I loved so much for my photography.

…These photographs I took of her in 1949 represent a young Marilyn. The poses are casual, because this is the kind of photography I was very active in creating in those years. I did not care how the wind blew her hair, the more natural, the more messed up by the fast movements, the better. I like her her to be all messed up.