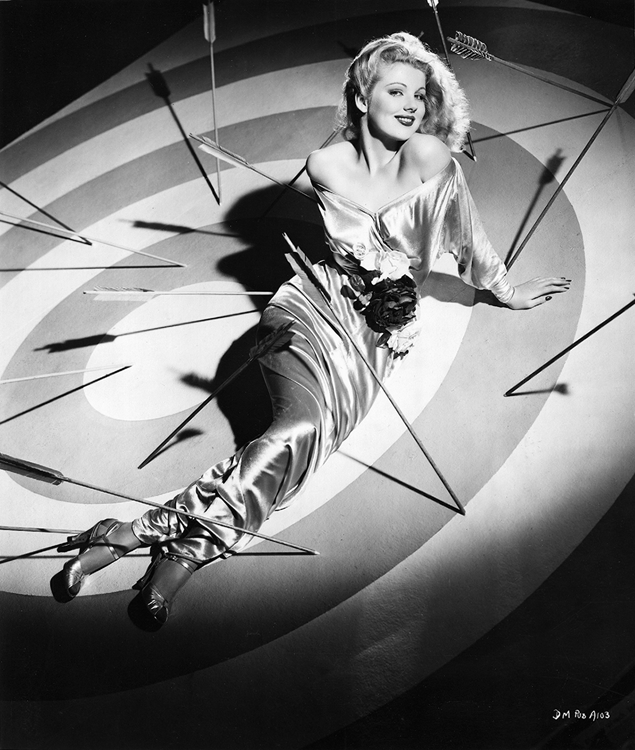 Around 1944. Dolores Moran has graduated from drive-in car hop to popular cover girl for Yank, The Army Weekly. “Flying Tiger” pilots have nicknamed the bombshell their “Tiger Girl”. Doubtless that is due in no small part to pin-up shots like this one, issued by Warner Brothers, where she’s an aspiring starlet (“palladium blonde” tresses courtesy of Perc Westmore).

She has high hopes that her supporting role as Mme Hellene de Bursac in To Have and Have Not will propel her to stardom. But she can’t compete with Bogart and Bacall’s smouldering on-screen chemistry. In spite of an affair with the film’s director, Howard Hawks, her role dwindles as that of Bacall grows. Indeed she will end up better known for her scandalous private life than for her on-screen appearances. But the best Dolores Moran story comes from IMDb.

In 1941 15-year-old Dolores was working as a car hop at a drive-in in San Jose, California. One night she brought local apricot grower Anthony Ponce a cup of coffee. He never saw her again, never contacted her and never spoke about her to family members, but when he died aged 58 in 1968, a reclusive bachelor, his 1947 will provided that she inherit most of his $300,000 estate. Court costs, lawyers fees and negotiations reduced the amount considerably but the will was eventually upheld. When the news made headlines in December 1968 Dolores admitted that “unfortunately for the life of me, I can’t remember the man”. She then reflected on his gift to her: “Life is truly an extraordinary procession. What a beautiful thing. It’s phenomenal. I’m not living in poverty, certainly. But my reaction was one of marvel, awe”.