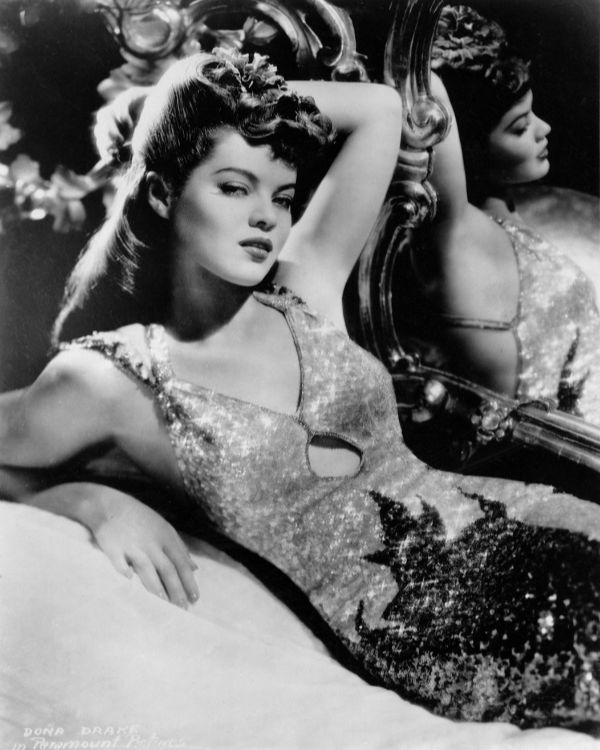 Around 1942. Dona Drake vamps it up as she reclines seductively on a couch strategically placed in front of a mirror. No surprise that Screenland magazine describes her as “delectable Dona … pert and provocative.” Age 28, she started her career as a singer and, like so many pretty girls, fetched up in Hollywood.

Six years ago, she was questioned by the FBI in connection with the killing of Louis “Pretty” Amberg, a mobster with a tendency to stab a fork in people’s faces if they annoyed him. Amberg’s body had been found on the back seat of a flaming car early in the morning of 23 October 1935. He had been stripped of his clothes, a sack placed over his head and his hands tied with wire. Dona was identified as his “girlfriend.”

Dona Drake is in fact the fifth professional name adopted by Eunice Westmoreland and is in effect her Hollywood brand name. After singing and dancing as a chorus girl on stage and in nightclubs and reviews, she formed a sister-act with a Mexican girl called Rene Villon, morphing into Una Villon in the process. When Rene got married, she formed an all-girl band, “The Girl Friends,” and changed her name to Rita Rio. During that time she toured with, among others, Marie Wilson. In Hollywood in 1940, she presented herself as Rita Novella, subsequently changing her name to Reta Shaw. Then Paramount cast her in Aloma of the South Seas (1941), rechristening her yet again, this time to Dona Drake.

In 1944, while filming Hot Rhythm, her friend, actress Joan Blondell, will introduce her to Oscar and Emmy award-winning fashion designer William Travilla and the couple will wed later that year. They will have a daughter in 1951 and remain married until Dona’s death in 1989.