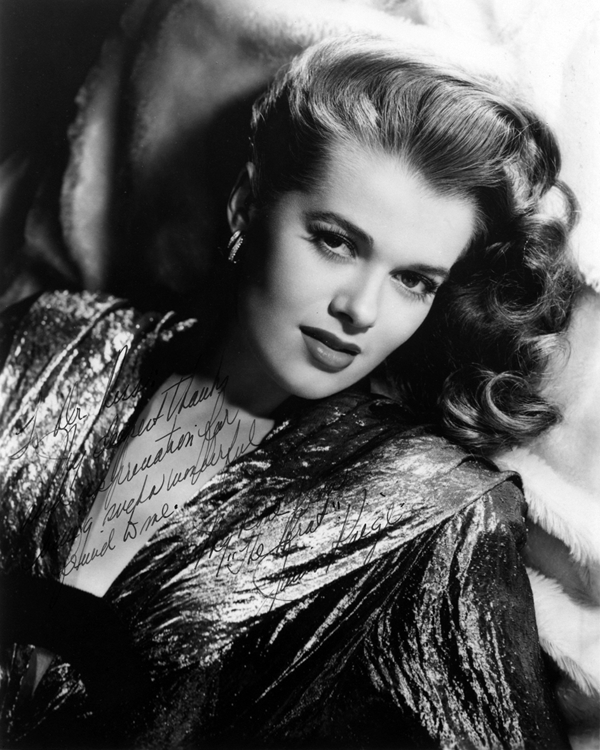 1945. Inscribed “To Dr. Ress, My dearest thanks and appreciation for being such a wonderful friend to me. With love, “The Brat” Janis Paige”

Janis is 23 years old and has been in Hollywood for just a couple of years when she dedicates this photo to Dr Ress. She’s been dating actor Rod Cameron, who announces their engagement and then turns up with Yvonne De Carlo.

After graduating from high school Janis moved with her mother to Los Angeles where she worked evenings at the Hollywood Canteen serving sandwiches and coffee. Her big break came when she was asked to fill in for a singer. After performing two songs, she was approached by the assistant to studio head Louis B Mayer and signed to an MGM contract. To prepare for her screen debut in the Esther Williams vehicle, Bathing Beauty (1944), the studio changed her name from Donna Mae Tjaden to Janis Paige and entered her for various beauty contests. She has been crowned “Miss Atomic Energy” and “Miss Delicious Apple”.

The gossip columns will speculate on Janis’s relationships with a series of suitors including producer Albert R “Cubby” Broccoli (who will go on to produce many of the James Bond films) and actor Lew Ayres before in 1947 she will marry San Francisco restaurateur Frank Louis Martinelli. Two years later she will be dropped by Warner Bros and in November 1950 she will divorce Martinelli. But as her movie career collapses, her career in musical theatre and on television will begin to take off.

Stardom will come in 1954 with her role as Babe in the Broadway musical The Pajama Game, and that December she will appear on the cover of Esquire magazine. She will return to the big screen in Silk Stockings (1957, with Fred Astaire and Cyd Charisse), Please Don’t Eat the Daisies (1960, with Doris Day) and Bachelor in Paradise (1961, with Bob Hope). She will continue to appear on stage and on television and will marry twice more.