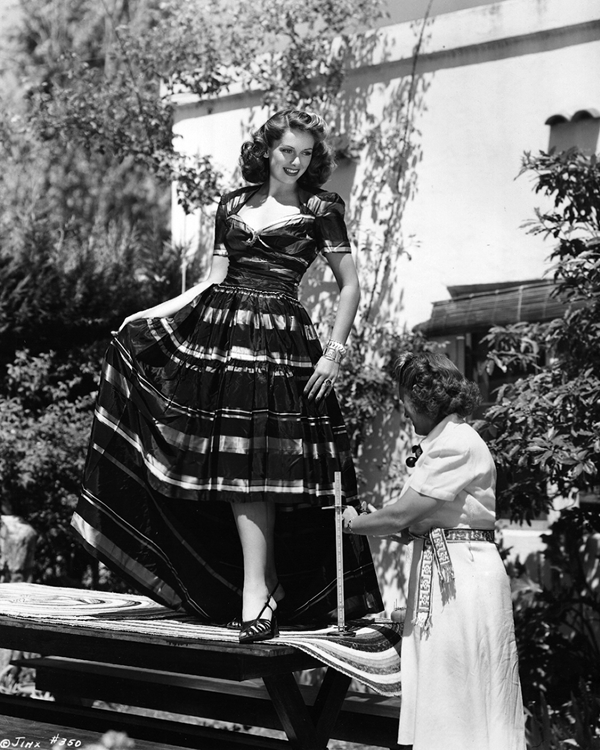 1943. With her hazel eyes and lithe figure, Jinx Falkenburg is one of America’s highest-paid cover-girl models during World War II and, with her husband Tex McCrary, will go on to be a pioneer talk-show star on both radio and television.

She left Hollywood High School in 1935 to pursue acting and modeling. She was spotted playing tennis by a Warner Bros talent scout and signed to a studio contract. Since she was fluent in Spanish (she grew up in Chile), she was cast in Spanish-language movies distributed only in Latin America.

Two years on, she met Paul Hesse, a professional photographer whose work features regularly in The American Magazine. In August 1937, her face appeared on the cover, which quickly led to invitations from more than five dozen other magazines.

In 1941, Liebmann Brewery, the maker of Rheingold beer, decided to embark on a marketing campaign based on the idea of “Miss Rheingold” – a model to be chosen each year to represent the brand. Jinx was the first Miss Rheingold and her career moved up a gear.

She signed with Columbia and got roles in movies made for distribution in the US. However, to be honest, she’s not the greatest actress and most of the movies are pretty second rate. Cover Girl is as good as it gets for her.

In 1945 she will marry Tex McCrary, a journalist and public relations specialist, and the couple will persuade radio station WEAF in New York to give them their own show. Tex will write most of the show and will coach Jinx to do the interviews. Tackling controversial issues such as venereal disease, the United Nations and the atom bomb, Hi, Jinx will be a big success and lead to appearances on television and a second and equally popular radio program, Meet Tex and Jinx.

At one point in the 1950s, “Tex and Jinx,” as they will be known in virtually every American household, will have two radio programs, a five-day-a-week television show and a syndicated column in The New York Herald Tribune.

Mrs. Falkenburg cuts off the skirt as Hurrell snaps the picture. A fitting, turn up the hem and press, and voila, Jinx has a new date dress. Jinx will play herself in the Columbia picture “Cover Girl”.