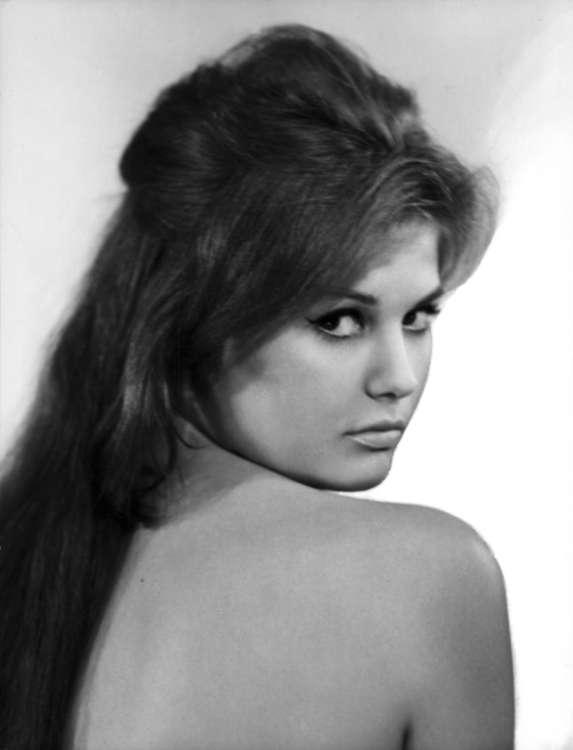 1960. Claudia Cardinale, embarking on her career as a movie actress, poses for a portrait to publicize her upcoming film, Il bell’Antonio. The resulting shot is totally aligned with the aspiration of her agent, Franco Cristaldi, to make her one of Europe’s top sex symbols.

He’s taken her to the right place – Studio Luxardo is one of the leading photographic studios of the day, visited by all the biggest divas, including Gina Lollobrigida and Sofia Loren. The most talented photographer there – and also the one who specialises in photographing women – is former Brazilian model, Elda Luxardo. Elda is the mother of Dario Argento, who will make his name as one of the most influential directors of giallos as well as writing the screenplay for Once Upon a Time in the West. In an interview for Rai Italia, he remembers his mother and her work at the studio. Here is an edited transcript:

It was a big studio on four floors. Three were used as studios … while one was an apartment and I was born there. At that time, my mum had just opened her studio, Luxardo, which was a historic place, because my uncle, Elio, had just gone to Milan along with his wife, Gertrude. He had founded Luxardo in Milan, so my mum had stayed behind in Rome. And my mother was a photographer at the time. It was a very turbulent time because first there was my uncle Elio, and they also took photos of the hierarchy, fascists, etc. Then later, after the war, my uncle wasn’t there anymore, he was in Milan. So my mother started taking photos of the Americans – American soldiers, generals. … That’s where I grew up. …

I’d sit there, quietly, in the make-up room, drawing or doing my homework. Meanwhile, all around me I was surrounded by models and film stars. My mother specialised in female portraits. She was the most important photographer in post-war Italy. So, while I was revising for a geography lesson, just over there was Gina Lollobrigida, Isa Miranda, Silvana Pampanini along with lots of other very famous actresses at the time and perhaps forgotten today. They’d change dresses, fix their hair and endure long make-up sessions. My mother set up the lights, positioned the faces, moved their chins. I was in ecstasy over those visions. …

I liked it there, sitting quietly watching all this commotion, people coming and going and being photographed. They’d laugh, look at their photos, admire them. It was a very good life, very interesting. I learned a lot of things which, as a director, obviously I use in my films today. I learned lots of things about photography and how to shoot close-ups.

I’d usually sit in the changing room, which was a sort of small corridor. It was narrow and long and I sat at the end, and at the other end was the actress or actor, the star or even a normal person who came to have their photo taken. My mother would photograph everyone, even perfectly normal people with very beautiful faces but they never went on to anything, they never made any films, they didn’t do anything. …

And I watched how my mother set up the lights, how she illuminated them, how she removed reflections from the faces and how she did the make-up. It’s stayed in my memory, all this chaos with the make-up artists who were chatting among themselves, laughing and joking. In the meantime, my mother would take this character, she’d place them, move their face. She spent a long time taking a photo, and she didn’t take a lot – she’d take three or four. But they were done very well. Each one was very studied, I remember.”

Could Dario Argento have been lurking in the background during Claudia Cardinale’s shoot?

The back of the photograph is stamped “NUOVA DIAL, ELDA LUXARDO & FRANC. ALESSI, P. MIGNANELLI, 25, TEL. 673.964, ROMA.” There seems to be not a lot of information available about Francesco Alessi. According to la Zattera dell’Arte, he is born in Messina in 1920. While still young, he moves to Rome to pursue his only passion: cinema. He works as a stills photographer from 1950 to 1975 (on IMDb he has eight movie credits including Satyricon), shooting, among others, Sofia Loren, Toto, Marcello Mastroianni, Vittorio Gassman, Ugo Tognazzi, Walter Chiari and Claudia Cardinale.

Sadly, I’ve managed to find nothing about the collaboration between Elda Luxardo and Francesco Alessi.