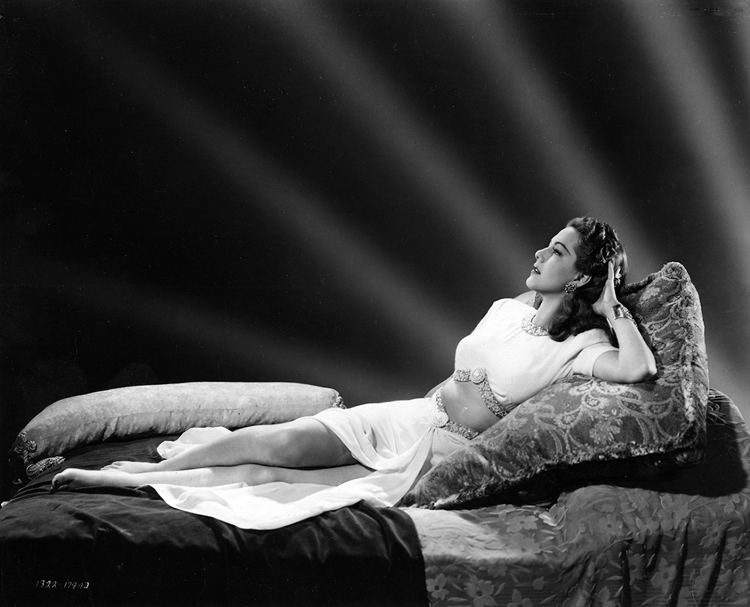 1944. Maria Montez, aka the Caribbean Cyclone, has just the exotic looks and manner that Universal Studios need for the fantasy adventure films (known in the industry as “tits and sand” pictures) they make to entertain Depression-weary audiences of the early-1940s – movies with titles like Raiders of the Desert, Arabian Nights and Cobra Woman.

Maria isn’t a great actress or dancer, so she trades on her looks and her flair for self-promotion to become something of a celebrity. According to an article in the 8 September 1951 edition of the Los Angeles Times:

She borrowed an old but sure-fire technique to get ahead in the movies. She acted like a movie star. She leaned on the vampish tradition set up by Nazimova and Theda Bara… She went in heavily for astrology. Her name became synonymous with exotic enchantresses in sheer harem pantaloons.

But some of those gals really came into the gallery ready to go – like this gal Maria Montez. She had a great body, she would just come in and lie there naked as a jaybird, she didn’t care.

Less seductive, according to studio gossips, is her use of the waste bin in her dressing room, which she prefers to a trip to the toilet.

In his autobiography, Sun and Shadow, Maria’s second husband, actor Jean-Pierre Aumont, remarks on the unusually casual attitude at her Beverly Hills home:

It was a strange house. You didn’t answer the phone or read the mail; the doors were always open. Diamonds were left around like ashtrays. Lives of the Saints lay between two issues of movie magazines. An astrologer, a physical culture expert, a priest, a Chinese cook, and two Hungarian masseurs were part of the furnishings. During her massage sessions, Montez granted audiences.

Born in the Dominican Republic, Maria has been educated in the Canary Islands and lived in Belfast, Liverpool and South America. Her first marriage, age 17, was to a wealthy banker who served in the British Army. It ended in divorce and she fetched up in New York, where she became an artist’s model. One of Hollywood’s many talent scouts spotted her and suggested a screen test. She signed with Universal Studios and made her screen debut in 1941.

In the late-1940s, Jean-Pierre and Maria will form their own production company and move to Paris. In her palatial home there one day in September 1951, she will be found by her sister, Anita, unconscious in the bath, with only her forehead above water. Anita will call a doctor and firemen and they will use artificial respiration for three hours in a vain effort to resuscitate her. She will be just 31 years old. According to an obituary in The New York Times published the following day:

Physicians said they believed death had been caused by a heart attack while the actress – proud that her figure never topped 125 pounds – was taking her daily bath in extremely hot water mixed with reducing salts. But the possibility of an accidental drowning following a heart attack was not entirely ruled out.