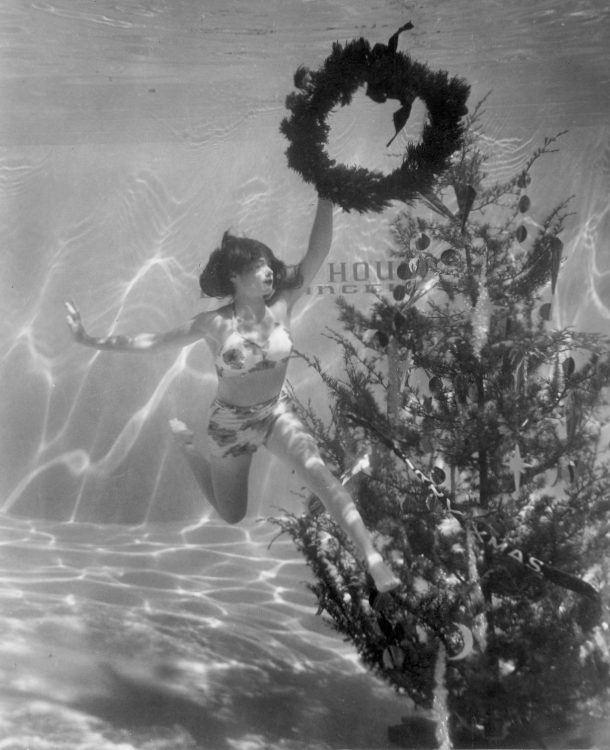 1946. Nancy Guild loves Christmas so much that she’s decided to decorate every bit of her home, including the swimming pool! It’s an exciting time for her. The first movie in which she appears (uncredited), Somewhere in the Night, has just been released and she’s in the middle of an on-and-off engagement to movie producer and millionaire Ed Lasker. More off than on, it would seem because in April next year she will marry actor Charles Russell.

However, two and a half years later, that will be off too and she will be in court seeking a divorce. The presiding judge will be less than impressed when she testifies that her husband wasn’t interested in tennis games and horseback riding, so she had to go alone: “I am an outdoor girl, but my husband, being from New York, was more of a city man and liked the indoors best.” To which the judge replies: “These little incompatibilities might happen in any marriage, they’re not grounds for divorce.” So, Nancy highlights other behaviours that have undermined their marriage: Russell grabbed the back of her coat when they were in Rome, he grabbed the back of her dress in Malibu, California, he told her he didn’t love her, he called their marriage a mistake. The judge finally awards her custody of her infant daughter, $1 a year as token alimony and at least $80 a month child support.

She will have a couple more goes at matrimony and make a handful of movie and TV appearances. But in spite of 20th Century-Fox’s attempts to promote her (the studio’s publicity writers announce that “Guild rhymes with wild!”) her career will peter out.