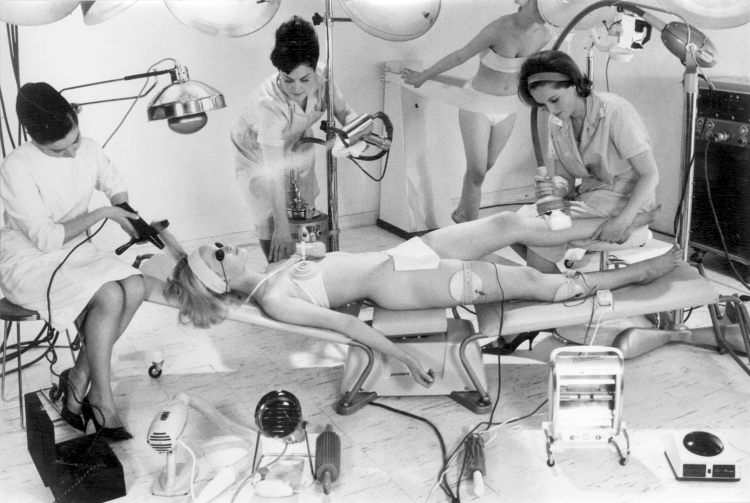 1962. All Systems Go! – Space Age Beauty Equipment To Put You Straight In Orbit is the headline caption for this amazingly choreographed photograph, which appears in the 22 May issue of Queen magazine.

The shot features five models including Ann Roberts and Cath Herbert together with 17 futuristic beauty treatment tools. The largest is an electric Stauffer Massage Couch, a piece of equipment used for spot reduction and available for hire at four guineas a week from Electric Medical Hire at 82 George Street, with door-to-door delivery and supervised installation.

In the photographer’s day book the shot is referred to as “Beauty works”. The date of the “sitting” is 2 May and the location, Carlton Artists Studios in London’s Great Queen Street, which was founded as a commercial studio in 1902 by Canadian artists Archibald Martin, T.G. Greene, Norman Mills Price and William Wallace.

What an audacious shot for the period – it almost seems to prefigure the work of Helmut Newton! What’s also great about it is the way it captures the mood of the moment – optimism around “the white heat of technology,” as UK prime minister Harold Wilson puts it in one of his most memorable speeches the following year.

The back of the photo is annotated in pencil “C18 Norman Parkinson original photograph for Queen Magazine Q202-10 – numbering by David Searle, N.P’s assistant.”