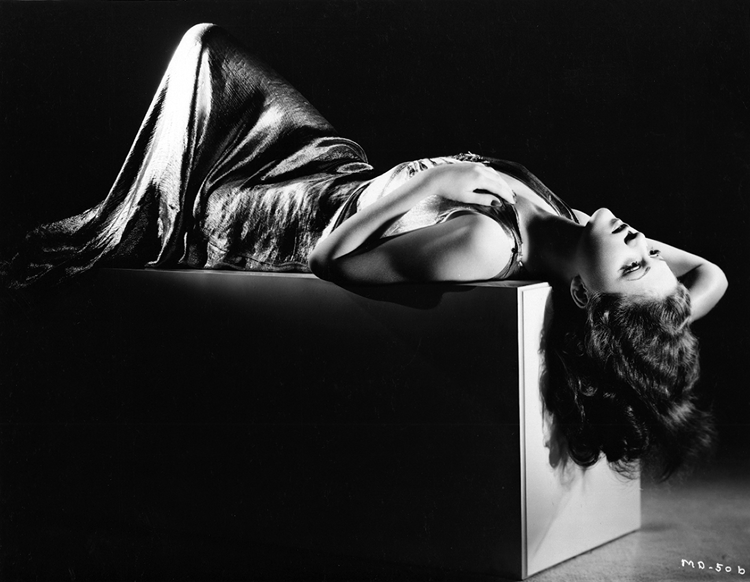 1941. Little is known of Peggy Drake. She’s Austrian by birth but emigrates to the US with her parents when she’s just three years old. It’s probably to RKO, her studio, that she owes the name that appears in the credits – when she’s actually credited, that is. Here she reclines seductively on what looks like a very hard and uncomfortable box.

IMDb credits Peggy with appearances in five movies, all released between 1940 and 1942. The closest glimpse we get of her is in an article by Frederick C Othman in the 2 April 1942 edition of the St Petersburg Times:

What we have today, we think, is a funny story. At least it seems funny now.

A few months back, you may remember, RKO spent nearly $50,000 testing beautiful young women to play the part of a South Sea Island belle opposite Charles Laughton In “The Tuttles of Tahiti.” The studio finally chose Miss Peggy Drake (known as Leise Lotte Mayer to the neighbors in San Francisco) and the brown-eyed and nicely curved Peggy went to work in her first movie.

Tahiti blossomed in a cavernous sound stage in Culver City, during the rainy season. The lovelies basking in the movies’ South Sea breezes really were suffering goose pimples.

They were barefooted, walking on cold earth which the grips hosed down twice a day to settle the dust. Most of them caught the sniffles, but on they worked.

By the time the picture had been half completed, Miss Drake’s runny nose had turned into a first class case of pneumonia. She went to the hospital, where she almost died.

The company had to quit shooting, while the costs mounted for more than two months.

Up above we mentioned her curves. They were exactly right when she took to her bed at the weight of 108 pounds. When finally she got up and returned for work, the curves were no more. She weighed 96 pounds.

She didn’t even look like the girl who had started the picture. What to do? Simple. Fatten the gal up in a hurry. The boys fed her malted milks and bananas and whipping cream and nothing happened. She remained curveless and wan.

It looked like the whole picture would have to be junked, when Augie Goupil, the native Tahitian technical director, came to the rescue. The one thing that’d put some meat on her bones, said Augie, was breadfruit. The women of the South Seas, he said, kept their billowy figures by consuming breadfruit.

The day was saved. Production could be resumed. The curves returned.

This, Miss Drake reported, was a harrowing experience, but not nearly so harrowing as another.

“The very first day I worked in my first picture (she said) the director put me in the arms of Jon Hall and told me to kiss him tenderly. I never had kissed anybody before, at least in public, and here I stood, snuggled up to Mr. Hall, with a spotlight shining on me.

“Behind the spotlight were 56 people – I counted them – watching every move. I could feel their eyes boring into me. And there was Mr. Hall with my arms around his neck. It was a very peculiar feeling.”

Yep, she kissed him. Later on she was introduced to him. A nice man he turned out to be, too.

So everything’s all right now, including Miss Drake’s feet. Remember back a few paragraphs where she was wandering around the Tahitian sands without any shoes? Well sir, the sands were full of nails and soda pop caps. Tough on the hoofs. Very tough, said Miss Drake.

She is, in any event, 20 years old and now that she’s not afraid to smile, as attractive a girl as there is in town. It used to be that she never smiled. A San Francisco photographer told her that when she did, her gums showed and that was bad. As it turned out, everybody’s gums show when smiling. In the movies and out of them. That knowledge is a relief to Miss Drake.