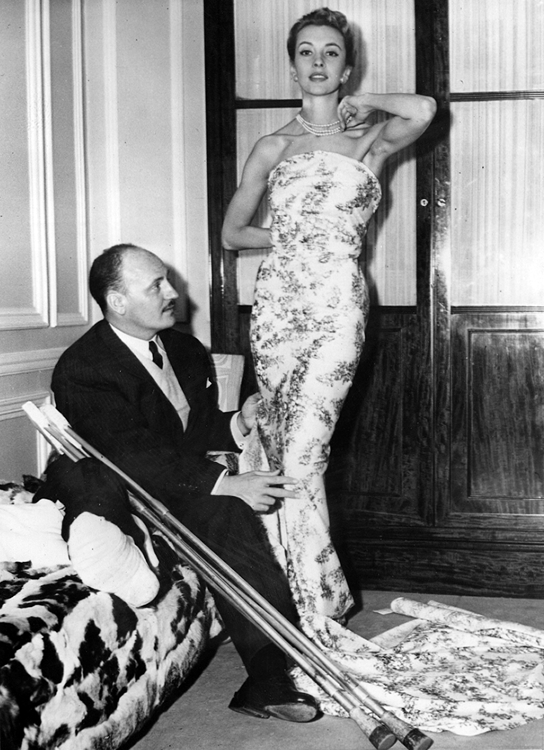 1955. Pierre Balmain works with Edward Molyneux and Lucien Lelong before opening his own couture house in 1945. Along with Cristóbal Balenciaga, Jacques Fath and Christian Dior, he is one of the young Turks who revitalize Paris couture after the German occupation. Balmain is a pioneer in adapting couture designs to prêt-à-porter, and in 1951 he sets up a New York operation to tap into the American market. He also designs costumes for French films, including Et Dieu Créa La Femme, which introduces Brigitte Bardot to the world. A caption on the back of the photo reads:

He’s anti-Dior in knee controversy
Paris, France….at a women’s luncheon last week, Paris designer Christian Dior figuratively put his knee in his mouth by calling woman’s knees “the ugliest part of the feminine anatomy.” The result is that the French fashion world is once again knee-deep in controversy, most of it pro-knee and anti-Dior. Pierre Balmain, another famous Paris designer, has come out as “pro-knee.” However he amplifies this by saying: “a woman should not show her knees – not because they are ugly but because they are private! Balmain adds that he has no plans for shortening skirt-lines in his spring collection. Balmain is shown draping one of his models in a new printed fabric which conceals the knee but at the same time outlines it. “Much more attractive this way, than exposing the knee naughtily”, Mr Balmain explains. The designer is nursing an injured leg suffered in a skiing accident.