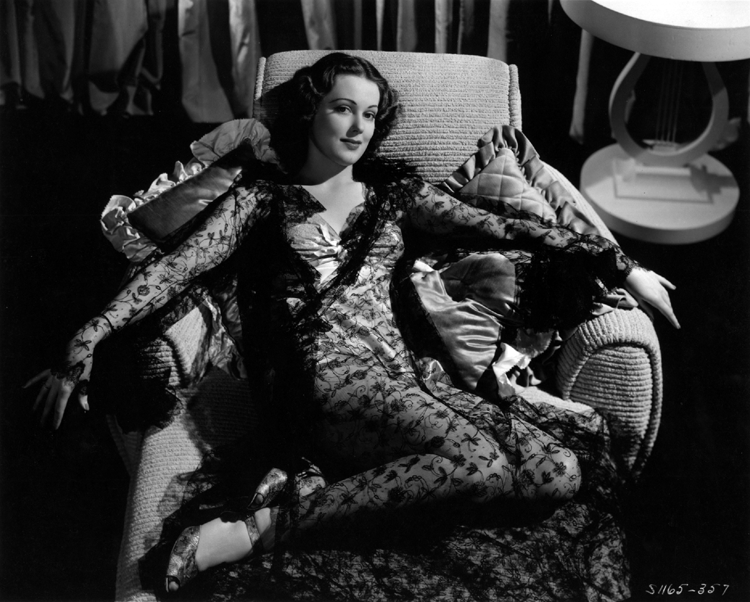 1941. Her birth name is Alaine Brandes and she’s feeling pretty good about things. Last year she was crowned Ad Queen of Chicago by the Chicago Federated Advertising Club and Movie Glamour Girl of 1940 by the Motion Pictures Still Photographers Association and managed to make her first three appearances (all uncredited) on the silver screen. This year she’s following that up with a further six appearances, for two of which she gets credits. A caption on the back of this photo reads:

PHOTOGRAPHERS GLORIFY THE ZIEGFELD GIRLS…Still photographers had a heyday at Metro-Goldwyn-Mayer Studios when they each selected their two ideal Ziegfeld girls from the production “Ziegfeld Girl” and pictured them as they thought the great Florenz Ziegfeld might have glorified them. These girls were chosen from nearly a thousand applicants as outstanding American beauties to be glorified in Adrian-designed costumes for “Ziegfeld Girl.” Starred in the musical, which Robert Z. Leonard directs and Pandro S. Berman produces are Judy Garland, James Stewart, Hedy Lamarr, Lana Turner and Tony Martin.

Next year (1942), Alaine will rebrand [pun intended] herself Rebel Randall. What a great name! And it can surely come as no surprise to her when, in the 1950s, she discovers that a New Orleans stripper has followed suit. The real Rebel has to resort to legal means to protect her name and reputation.

But like Jinx Falkenburg, Rebel will end up having her greatest success on the radio. As Hollywood’s only female DJ with her own Armed Forces Radio Service programme, America Calling, on KCBS, she will acquire such soubriquets as Miss Double Distilled Honey and The Girl whose Voice Could Melt an Iceberg.

She will also run up the world’s biggest phone bill – at least $2,000 a month – at least so she will claim. How so? Between records, she awards a free phone call to a GI overseas and his family at home. She pays those bills herself. Only one minute of the phone call is heard on air, with the remainder of the conversation private.