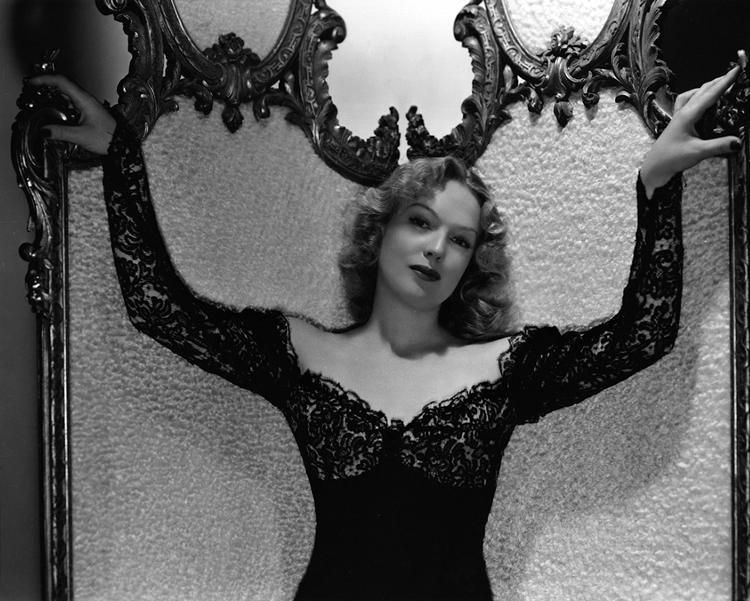 1940. Rita Johnson has grown up in Worcester, Massachusetts, where she waitressed in her mother’s lunchroom and sold hot dogs on the Boston-Worcester turnpike to make ends meet. By 1936 she’d escaped to Manhattan and was appearing in ten radio shows a week. A year later, she arrived in Hollywood, courtesy of MGM. Here she is in a glamorous pose promoting her latest film:

ONE OF THE SCREEN’S LOVELIEST LADIES…Rita Johnson, Metro-Goldwyn-Mayer actress, has been steadily climbing the cinematic ladder to stardom thi last year. From radio, Miss Johnson has won fame for her portrayals in such hits as “Edison, the Man,” and is currently featured with Lew Ayres in “The Golden Fleecing.”

She will go on to appear in a string of movies until, in 1948, a hair drier supposedly falls on her head – we’re presumably talking here about one of those enormous beauty-parlour models with massive, heavy hoods.

This, at least, is the story related by actress Mary Ainslee, a friend of Rita’s. Rita herself will be unable to remember what happened. At any rate, when she finally ends up in hospital for surgery to remove a large blood clot pressing on her brain, she remained in a coma for over two weeks.

That’s not the end of the matter. Walter Winchell, in his syndicated column, will report that: “Hollywood wonders if Rita Johnson’s concussion was caused by a former flame (screen actor-tough guy; not a writer), famed for knocking his darlings cold.” This is a thinly veiled allusion to ex-pro-fighter Broderick Crawford, to whom Rita was engaged in the late 1930s.

Los Angeles detectives will seize the offending hair dryer and a few other pieces of evidence but will disregard Rita’s “bruises, such as black eyes, back of ears, neck, arms, leg, swollen face,” concluding that “There is no evidence of victim receiving a terrific beating.”

At some point, Rita will begin drinking heavily. In 1965 her niece will pay her a visit and find “empty bottles, including one in the back of the toilet. She would pretend she was drinking water in front of me, but her voice would get a little more slurry, and I could tell it was vodka.” In October that year, Rita will die of a brain haemorrhage.

You can find another photo of Rita, together with a slightly different version of her story, in Hollywood Hallowe’en cheesecake.