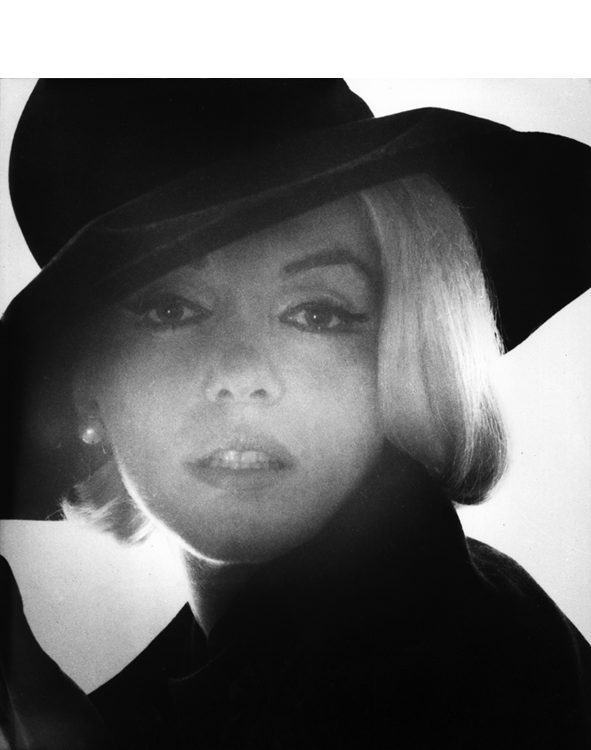 Bel-Air Hotel, Hollywood, June 1962. A great composition, this – Marilyn’s face framed by the black diagonals of her hat and collar. And the combination of lighting and grainy film stock make this almost like a mirage – Marilyn could dissolve at any moment. Here’s what Bert had to say about the session.

Babs (Simpson, the Vogue editor assigned to the shoot) didn’t want me to take pictures with the hat, and I thought the hat looked beautiful on her.

I felt compelled. Something was pushing me to take that picture. And that impulse went back to my original conception. I was after one picture to compare to Steichen’s Garbo and there was something Garbo about that hat. I’d always thought Marilyn was unconsciously creating herself out of the great stars before her – Jean Harlow, Lana Turner, Betty Grable. She was all the blondes in all the movies she’d ever seen. When I saw her in Some Like It Hot I realised she must have seen herself in Ginger Rogers too. Who would have thought there was a little of Garbo hiding inside Marilyn Monroe? I was seeing other aspects of Marilyn emerge … parts she had kept hidden and only now was sharing with herself and the camera. Shy elegance and dignity was now coming to the surface. It was an unknown Marilyn and it would demand a whole new kind of role for her.