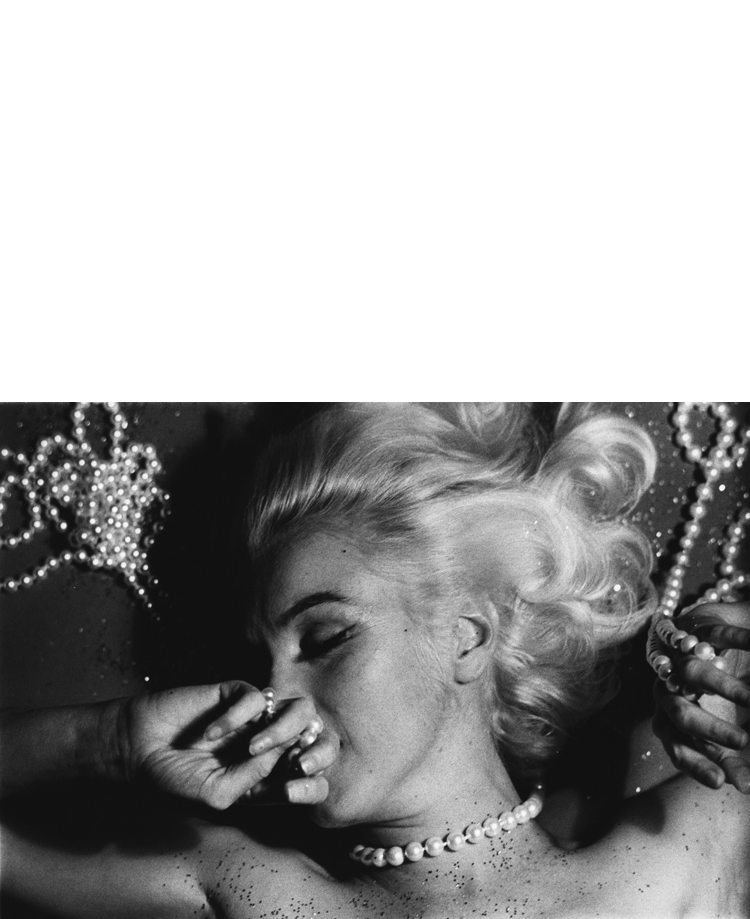 Bel-Air Hotel, Hollywood, June 1962. This image is from the final sequence that Bert took. It’s fabulously glamorous and intimate. And it’s also enigmatic – behind her hand is Marilyn laughing, smiling… or is this a moment of silent reflection? Here’s the story behind the sequence as told by the photographer.

“I want to do one more picture,” I said. “A beautiful head shot.” Babs (Simpson, the Vogue editor assigned to the shoot) said “Oh wonderful! We could use a great beauty shot. Kenneth (Vogue’s top hairdresser) will do the hair.” Everybody was very excited.

I knew how I wanted to do it. One day when I was taking pictures of a girl, she said, “What should I do?” On an impulse I said, “Lie down.” She said, “Okay,” and I took her picture standing over her. It’s very sexy that way, because the girl lying down feels receptive and pretty, and the photographer is in a position of power.

I was going to do one of those pictures of Marilyn. But I wasn’t going to do it just standing over her with a wide-angle lens, because you get distortion using a wide-angle right up close. Telephoto would give a perfect close-up without distortion. But I would have to get way up high, on a ladder or something. I’d be moving away to get closer … using distance to capture the intimacy I would have had with her if things had been – different.

I built up a kind of scaffolding out of a table and a chair and I climbed up on it. The proportion still wasn’t right; it needed more height. I added another chair. I had to be directly above her. I wanted her looking straight up into the eye of the beholder. As if he were making love to her. Whoever looked at this image of Marilyn would be stricken the way I had been. And she would give him back her love in that look. And they would be together for all time … it would be a picture of what might have been.

Everybody was working: Kenneth combing Marilyn’s hair. Babs arranging a string of pearls around her neck. I was way up there in the dark, looking down on her lying there with her hair spread out.

Marilyn was a little pensive, and I wanted her laughing, alive. So I said, “Could someone turn her on, please?”

Babs offered her some champagne.

Pat (Newcomb, Marilyn’s press agent) said to Marilyn, “What about those two loves in your life?”

I didn’t know who Marilyn’s lovers were but she obviously enjoyed thinking about them. She was laughing, looking over at Pat, and I said, “That’s great! But look up here, at the camera.” And to draw her attention to me, I said, “How about those two men …”

She was on, and the strobes were clicking, and the light was bouncing around, tinkling down, Kenneth came over with a handful of sparkle and scattered it in her hair. The pearls were around her neck, and she was laughing, free. And I whispered to myself, “Boy … how far out …” I really had her. The light was just right. Everything began to move a little fast.

…Looking down on Marilyn, I could see it happening, I was entering that space where everything is silent but the clicking of the strobes. She was tossing her head, laughing, and her arm was up, like waving good-bye.

I saw what I wanted. I pressed the button, and she was mine.

It was the last picture.