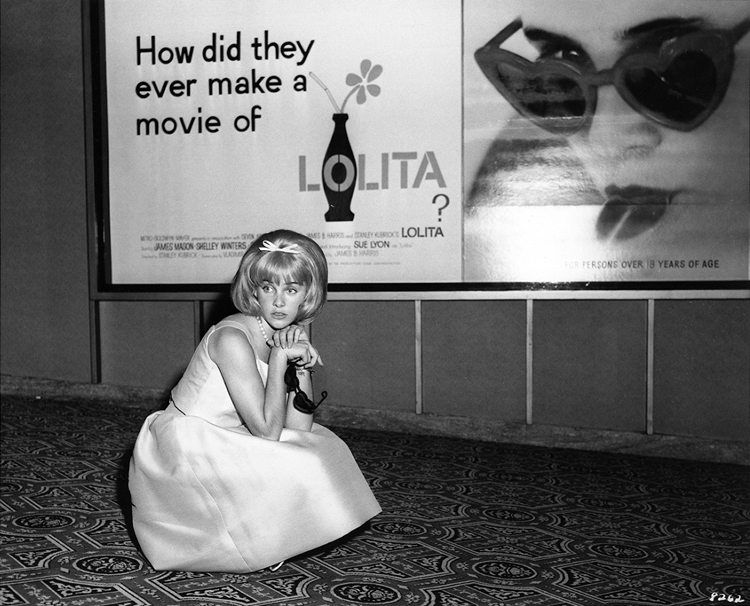 1962. Sue’s work as a child model in a commercial for JC Penney leads to small parts on TV in The Loretta Young Show (1959) and Just Dennis (1960). She’s only 14 years old when she’s spotted by Stanley Kubrick, who suggests that she test for the role of Lolita, the sexually ambiguous teenager and object of Professor Humbert Humbert’s fantasies in Stanley Kubrick’s adaptation of Valdimir Nabokov’s notorious novel.

The movie provokes a great deal of controversy and proves to be a blockbuster. Overnight Sue becomes a teen celeb and is typecast in audiences’ minds from then on. A caption on the back of the photo reads:

CAPACITY CROWD……including some of the biggest names in show business turned out at the Beverly Theatre in Beverly Hills for “LOLITA”. The film, which was produced by James B. Harris and directed by Stanley Kubrick, stars James Mason, Shelley Winters, Peter Sellers and introduces Sue Lyon in the title role.

ALL DRESSED UP…..But Sue Lyon, the 15-year-old star of Metro-Goldwyn-Mayer-Seven Arts’ “Lolita” can’t attend her own premiere…..picture is for persons over 18 years of age.