André de Dienes is best known for his photos of Marilyn Monroe and I’m planning to showcase some of those in a future article.

Here I’d like to draw your attention to two of his other obsessions: the great outdoors (and in particular the American West) and the nude. And perhaps this was his way of escaping from his past. 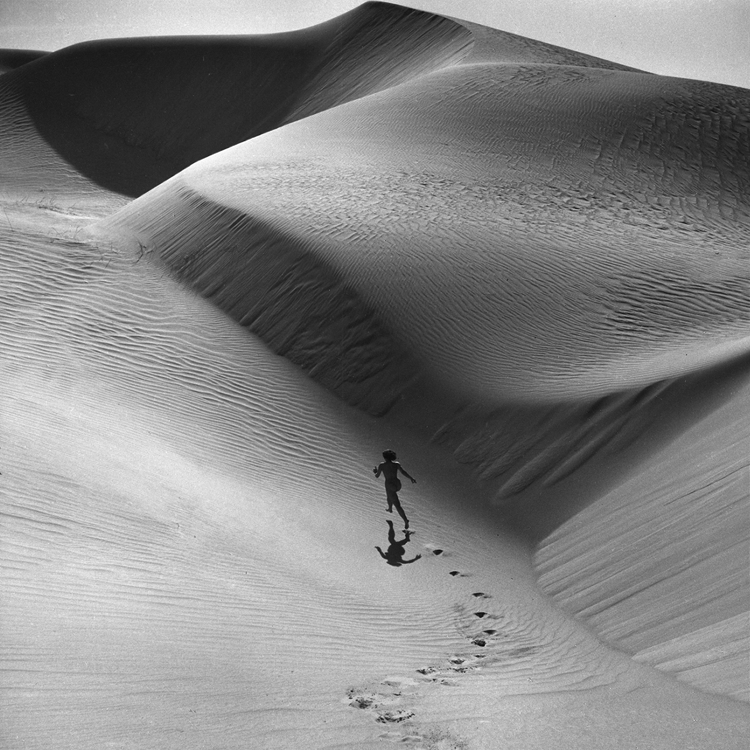 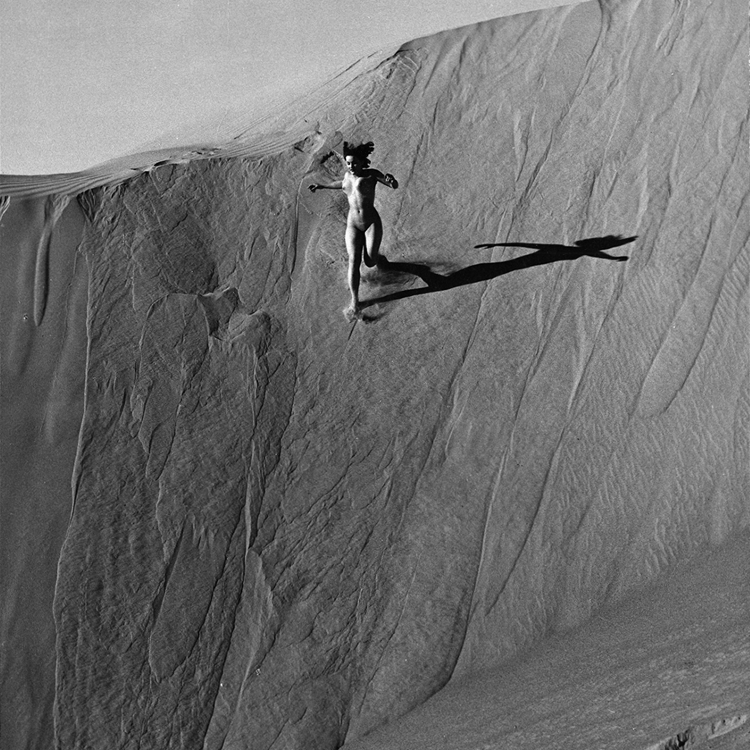 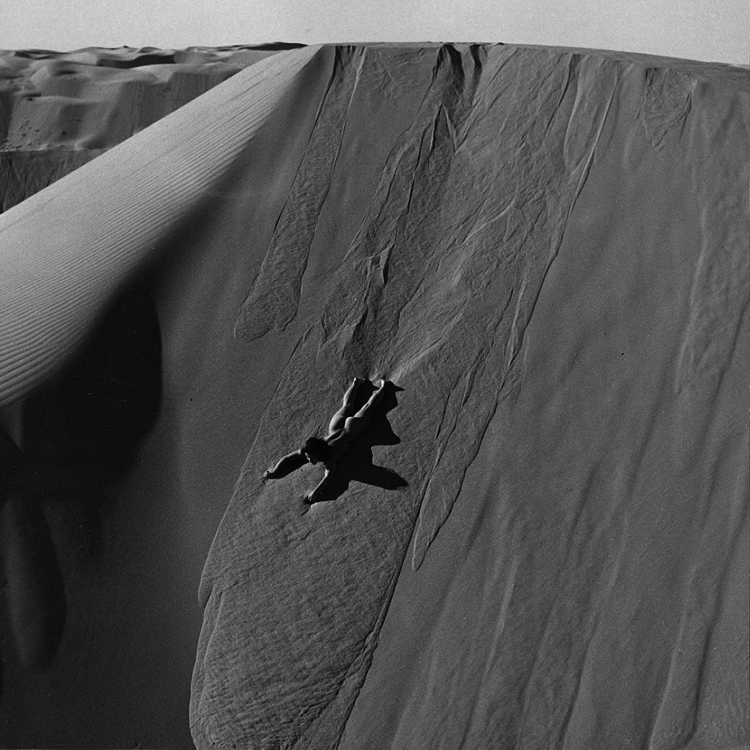 A bit of background

With the currency devalued and his family in crisis, André’s mother commits suicide and he runs away from the Transylvanian village of Turia, where he was born, to Budapest. There he takes a job in a fabric store, where he spends his days surrounded by wealthy women and expensive fabrics. By night he works as a stagehand so as to get to see operas and musicals.

But he hasn’t gone far enough to escape his demons. Age 15, he travels across Europe, mostly on foot, until he arrives in Tunisia where he purchases his first camera. In 1933 he goes to Paris to study art. There he’s taken up by the couturier, Edward Molyneux, for whom he undertakes a series of fashion shoots.

Five years later, in 1938, Arnold Gingrich, editor of Esquire, offers him work in New York City, and helps fund his passage to the US. There he works for Vogue, Bazaar, Life and other magazines. He’s still restless and in 1944, spurred on by his interest in native American tribes and by an invitation from David O Selznick (producer of Gone With The Wind), he moves to California.

A more vivid contrast with the land of his birth is difficult to imagine. And there he settles and begins to specialize in nudes and landscapes.

André de Dienes in his own words

His objective is to see beauty in nature. He travels extensively to find the right locations for his shoots, his favourites being deserts and seashores. He writes:

Every picture I have taken of the nude was for the sole purpose of expressing my feelings for the beautiful.

His advice to photographers interested in photographing the nude is unambiguous:

I ask you not to disgrace the nude with your camera. Respect it, express its beauty, exercise and better your beautiful emotions. Try not to photograph just naked girls; try to give meaning to your pictures; be proud of the photos you take. Do not abuse the luck and privilege of having a girl pose for you in the nude. Do not photograph nudes as I do, but try your own techniques, give in to your own feelings. Try to create something entirely new, abstract, in any way, as long as it remains within the bounds of decency.

Ironically but perhaps not surprisingly given his status as one of the leading photographers of nudes of the early 1950s, he ends up contributing to Playboy during its early years. In fact, one of his nudes features in the very first issue.

Neither in shooting nor in enlarging do I use a light meter (except for color indoors). My brain becomes a computer and I figure the exposure pretty accurately.

And to make his photographs true to life, he never retouches them.

Both of the shoots on this page were taken at the sand dunes near Yuma, Arizona.

I did drive through those sand dunes several times. It’s a beautiful stretch of about twenty miles wide, one hundred miles long of big, big sand dunes like in the Sahara desert in Africa, and I took many beautiful photographs of nudes. And I did encounter sand storms several times, so bad that the windshield of the car had to be replaced twice, and the insurance company refused to insure me any further.

They are brimming with escapist rapture. There’s something ecstatic about them. They show the rapport André de Dienes builds with his models, and the results are wonderfully spontaneous.

In Desert Contours, it’s late afternoon and the sun is getting low in the sky, casting long shadows across a vast desert landscape that dwarfs the unidentified model as she runs, jumps and surfs, her curves set against the swirls of the wind-ruffled dunes. She may occupy a tiny portion of the canvas but she is absolutely the focal point. 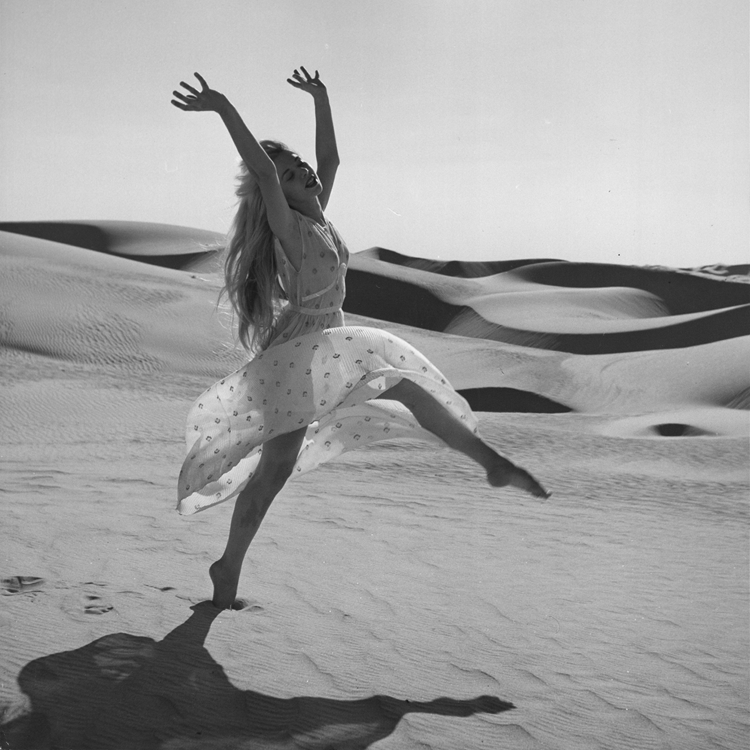 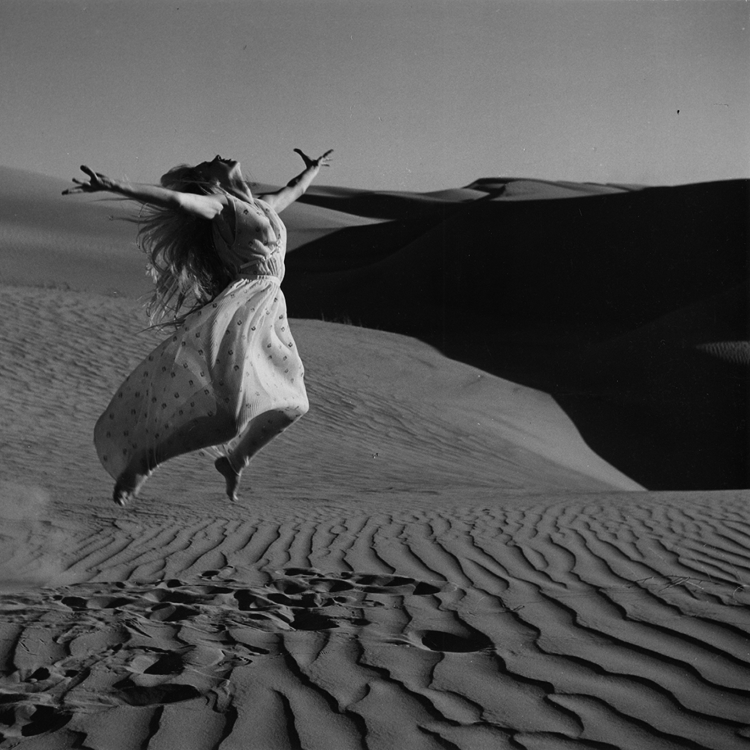 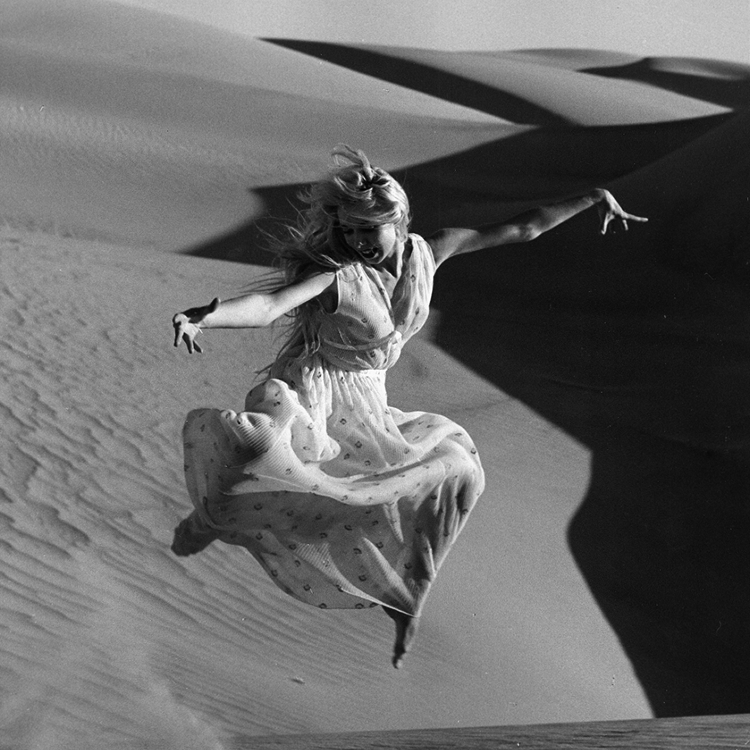 In Desert Dance, Mallia Phillips (identified as the model on the back of one of the prints) is jumping for joy, her diaphanous dress billowing around her.

There’s some good background in the introduction André de Dienes. Marilyn. Online, take a look at Ten Glamour Photographers of the 50s and 60s and Cursum Perficio.