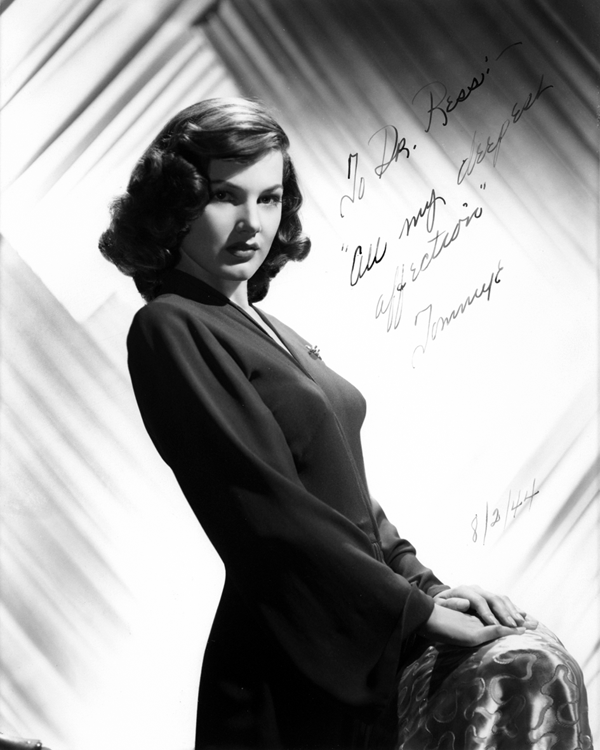 In May 1944, three months after inscribing this photo to Dr Ress, Tommye Adams receives an offer of marriage from singer–actor Tony Martin. The couple have been dating since January the previous year when he was on leave but still in the army. She says she’ll think about it…

The previous two years have been a whirl. In 1941 she went to university, was recruited as a Conover model and then signed as an understudy for a Broadway show. There she met Lyle Talbot, an actor and notorious ladies’ man twice her age.

In January 1942 she became his third wife (of five). Later that year the marriage was annulled. The same year she did a screen test at MGM and moved to Hollywood, appearing in three B-movies (two uncredited).

By November 1944 she will have decided to turn down Tony Martin and be involved instead with José Iturbi, a concert pianist 26 years older than her. Not long after announcing her engagement to him, she will meet her nemesis – 20th Century-Fox producer George Jessel, 23 years her senior, the ex of actresses Norma Talmadge and Lois Andrews and a pal of Darryl F Zanuck. They will begin an affair, which he will put on hold in March 1945 in order to turn his attentions to actress Greer Garson. That December, the gossip press will talk about Tommye marrying actor and amateur tennis player Frank Shields when his divorce comes through.

But that never happens. 1947 will see Tommye back with Jessel and by May the couple will begin a deadly roller-coaster, open-ended engagement. Meanwhile, by 1948 Tommye’s Hollywood career, which never really took off, will be well and truly over and she will try turning her hand to jazz and to becoming a screenwriter – both without success.

In 1950, following one in a series of rifts with Jessel, Tommye will slash her wrists. On a separate occasion she will bid him farewell at the airport by whacking him over the head. The press will have a field day and dub her “Miss Warpath 1950”.

In December 1954, intoxicated and barefooted, Tommye will be arrested in a parked car in Mandeville Canyon, West Los Angeles together with actors Broderick Crawford and Myron McCormick. The arresting officers will state that her outrage at being booked brought forth language that “turned the air blue”. For her part, she will tell reporters that she and her companions were, “reciting Shakespearean sonnets and reading T S Eliot poems.”

Two months later, on 11 February 1955, she will be off to the races at Santa Anita with Jessel and the following day they will go night-clubbing with Max Marks, a drugstore owner. The day after, 13 February 1955, Marks will go to her Beverly Hills apartment and find her body in bed, clad in a blue nightgown. Three days later the coroner will state that she died from an accidental overdose of barbiturates.