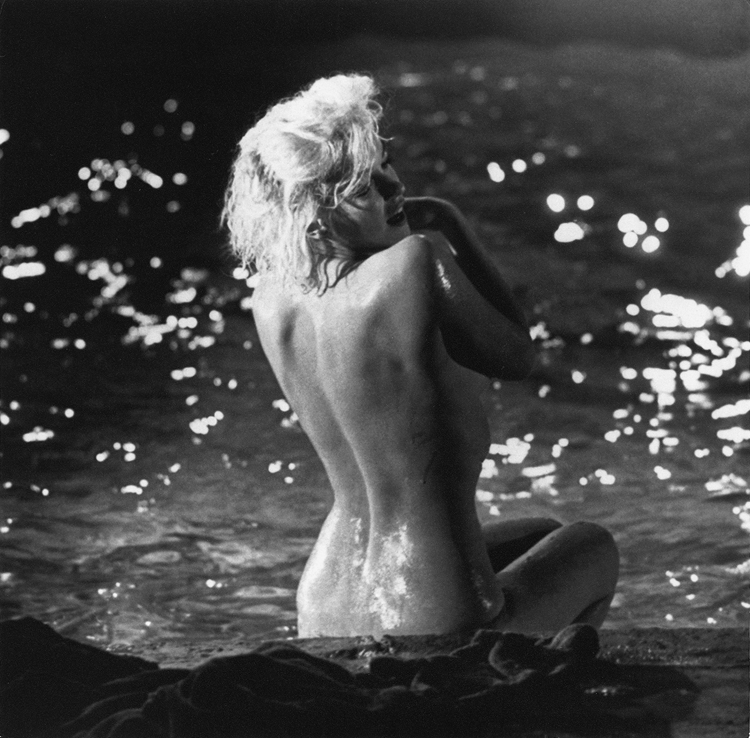 May 1962. Marilyn Monroe sits on the edge of a swimming pool on the set of Something’s Got To Give. In the film she swims naked, and to generate advance publicity the press are invited to take photographs of the scene. It’s the first time that a major star is posing nude at the height of their career. The film will never be completed because later that year Marilyn will be found dead in her apartment. The photographer, William Read Woodfield, will go on to become an Emmy-nominated writer and producer, penning scripts for TV series including Mission: Impossible and Columbo.

A variant of this shot sold on eBay had the following caption:

MARILYN MONROE IN THE NUDE

Fifteen years later – and not an inch out of place: when Marilyn Monroe allowed herself to be photographed with nothing on except a few drops of water her measurements were 37-22-35, exactly identical with those when 15 years earlier she had posed for a calendar picture that had launched her on her meteoric career. These sensational exclusive photographs were taken during the filming of “Something’s Got To Give”; since they were taken 20th Century Fox fired Miss Monroe excessively irregular attendance (Marilyn claims she was sick) and finally the film itself on which 2 million dollars have already been spent was abandoned.

Thus these are the only pictures ever to be seen by the public of Marilyn Monroe in the swimming pool sequence. Director George Cukor had objected to some brassiere marks being visible to the camera, whereupon gayly and boldly Marilyn offered to take then off. The studio was cleared with only key personnel allowed to be present; but photographers LAWRENCE SCHILLER and WILLIAM READ WOODFIELD managed to hang on.

Aged 36, after a career as tumultuous and glittering as any achieved in the annals of Hollywood the Blonde Venus of the 20th Century may have come to the end of her role in this particular film, but those photographs prove there is plenty of glamour and vivacity in the beautiful M.M. to draw the fans for long years to come.